Thank you Juan and Manolo!

Saturday 27th started the last ringing week in the Station. The first mist nest round wasn´t promising, with small numbers of Bluethroats and Chiffchaffs but the second one, if not better in numbers, let us a very nice Water Pipit subspecies coutellii, the Middle East one and also some Sardinian Warblers, Blackcaps, Reed and Willow Warblers. That was good enough but a Barn Owl in the Helgoland traps improved the amount of species as you can see in the happy face of Ken, a bander (ringer) from California who was helping us in the last days. 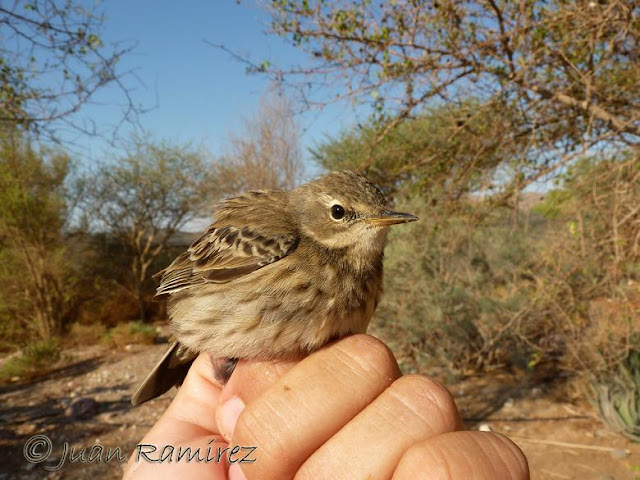 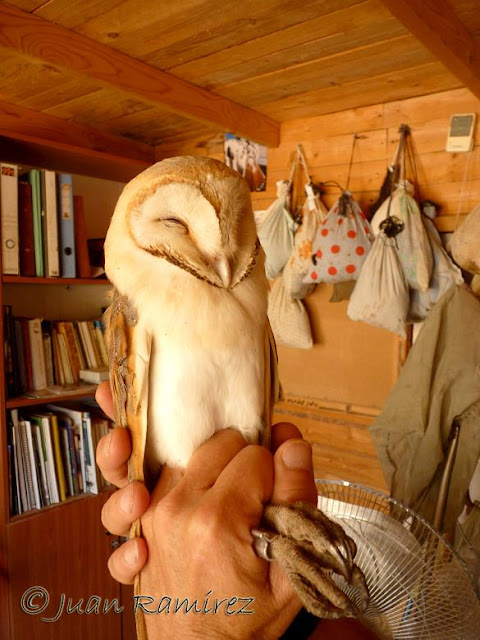 The captures and species increased a little bit the Sunday 28th. The half of those birds were, of course, Bluethroats and Chiffchaffs and the rest a miscellaneous of 13 species, mainly migrants like Redstarts, Blackcaps, Lesser Whitethroats, Red-backed Shrikes or Reed, Willow, Savi´s and Sardinian Warblers and local birds as Indian Silverbill or the Arabian Babbler, always fun for extranger ringers like Ken and I. The morning, everyday a little longer because the lower temperatures, was done. 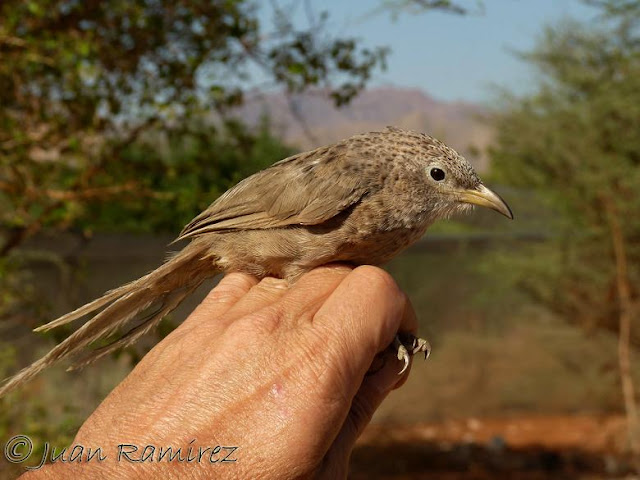 Monday 29th. Just opening nets we could see something had changed. Bluethroats and Chiffchaffs couldn´t wait till the nets to be wide open so they started to fell into just during the opening. That was promising. Six hours later, checking the numbers, we proved that was true. We ringed 50 Bluethroats and 70 Chiffchaffs with no retraps as well 3 Dead Sea Sparrows, the last Masked Shrike and one Song Thrush, 155 captures and almost 20 species. After the shy Chiffchaffs arrival, the big wave was already here and, hopefully, still continues some days… 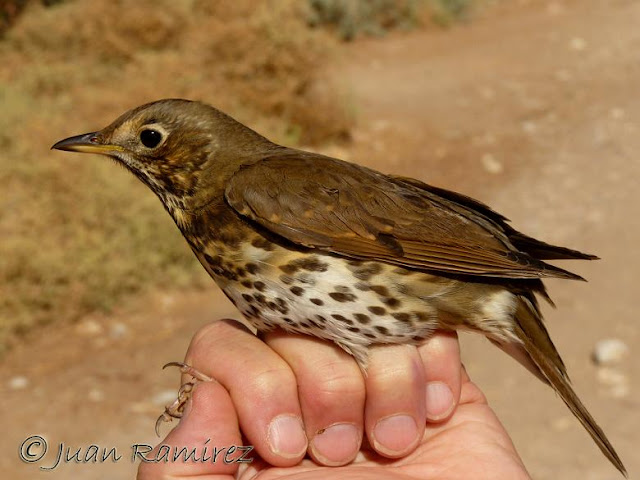 Tuesday 30th. First of all, I have to say that I was wrong, something that scarcely happens (to admit it, I mean), the Chiffchaffs wave wasn´t yesterday… it was absolutely today: 154 ringed this morning plus another 40 Bluethroats and few tens of birds more that involve Blackcaps, Reed and Great Reed Warblers, another Dead Sea Sparrow and one Cetti´s Warbler. 213 captures from more than 20 species in the best morning of the whole Autumn just a day before close the season.
Wendsday 31st of October. The last day of ringing in the Station. After the Chiffchaffs invasion of yesterday, we woke up with a phylloscopus hung-over but ready for more, if that was possible. But only 32 Chiffchaffs were caught and 25 Bluethroats, nice numbers anyway. Three European Stonechats, Redstart, Reed and Willow Warblers were present also my last day in Eilat but my very last ringed bird had to be one of my most beloved one. Just closing the Station that morning and after realize that my last one was a House Sparrow, my good friend Tzadok arrived with a very fulfilled bag, coming from the town where somebody phone him for rescuing a bird almost drown in a pond. It was a European Nightjar, a species that saw me making ridiculous on myself evening after evening. We let the bird in a cage till the end of the afternoon; time enough for getting dry, gave him a little to drink and, once ringed, released it with the last light of my last day. The Nightjar flew well enough for reaching the Nile this very night and this way the day and the season was done. See you all!
J.R.

Once again this is a great opportunity to say a big thank you to Juan, Manolo, Yotam, Sylvia and all the volunteers who worked during this season and made it happen!!!
Together we had: 439 Bluethroats; 398 Chiffi's; 257 Red-backed Shrikes!!!; 1 Citrine Wagtail; 1 Isabeline Shrike; 7 Scops Owls and many many more... bringing us to a total of 4581 birds!

over the last few days things were much slower, but still many Chiffchaffs are jumping around the park. Since I can't open the nets early there is no proper daily ringing, but still I managed to have 2-3 short sessions and add some more Chiffi's, Bluethroats and the second Red-breasted Flycatcher for the season. I hope to have more time birding and ringing soon before the most interesting month of birding in Israel will come to an end...
Itai
פורסם על ידי Itai Shanni ב- 12:25 AM