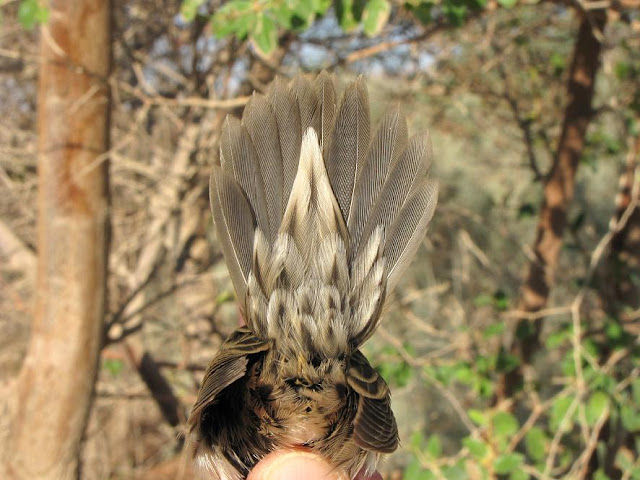 Autumn is here and today was officially opened also at the IBRCE ringing station.
Two days ago I met Yotam and told him that I hear many Locustella's singing from the reed beds around the park which may be very fruitful for ringing... When I talked with him I never thought that the first bird which will be handled for this Autumn will be such a Mega rarity in Israeli Standards.
This morning I received a texts message from Yotam saying "I opened the nets and the first bird I handled this morning is a Grasshopper Warbler but I don't have my camera with me..."
Now here's a dilemma: This is the 2nd day for school for my kids and they are still in need for escorts and such time consuming matters, I've never had a Grasshopper Warbler in Israel before and we really need to document this bird...
I've managed to get Tal (my wife) to do all the kids issues and rushed to the station for an Israeli twitch, next time, I hope that Yotam will forget his camera again, so I will have such a good excuse...

This is only the 8th time this species is ringed or seen in Israel (surprisingly all the other records are also from Eilat and Southern Arava), so for our European friends this may sound like a strange rarity, but it is a real mega down here... 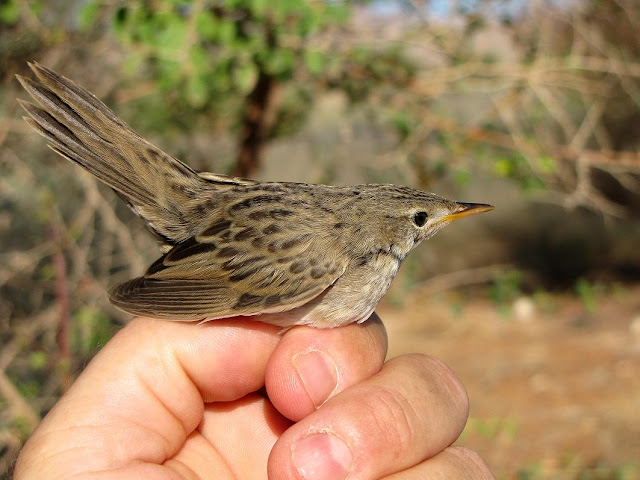 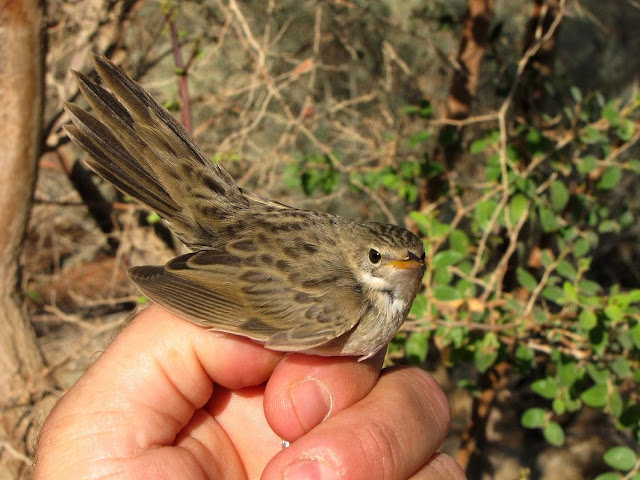 Overwhole there was a nice collection of Sylvia warblers with Blackcups, Eastern Orpheans, Lesser Whitethroats, Whitethroats & Garden Warblers as well as a few Eastern Olivaceous and Reed & Sedge Warblers and a single Red-backed Shrike to flavour the many Graceful Prinia's and House Sparrows. In total we handled some 50 birds (15 species) this morning with only 4 nets open for only 4 hours.

Over the last 5-6 months there are constant talks in the Israeli and international media about Iran and its nuclear program. Governments have fallen and many words were spoken pro and con the Iran issue.

This morning, I received a photo form a local Eilat photographer - Shimon Shiff, who said that he think he was looking on an Irania (the Hebrew name of White-throated Robin) in one of Eilat public gardens. Indeed this was a juv' Irania, which is probably on his way south after breeding somewhere between Mt. Hermon and Turkey - Iran. Well done Shimon for changing the nuclear issue from Iran and letting us taste some goodies from this wonderful ornithological area. 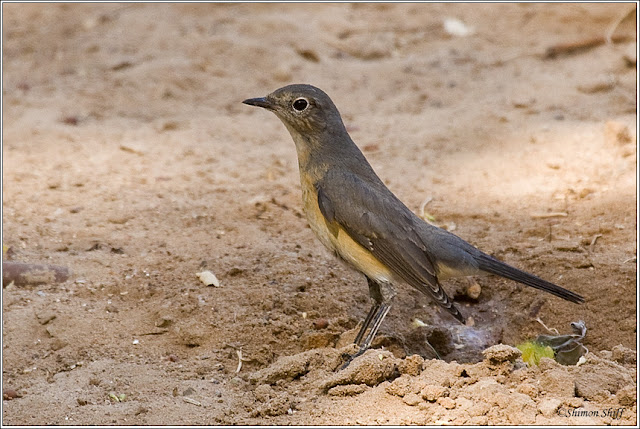 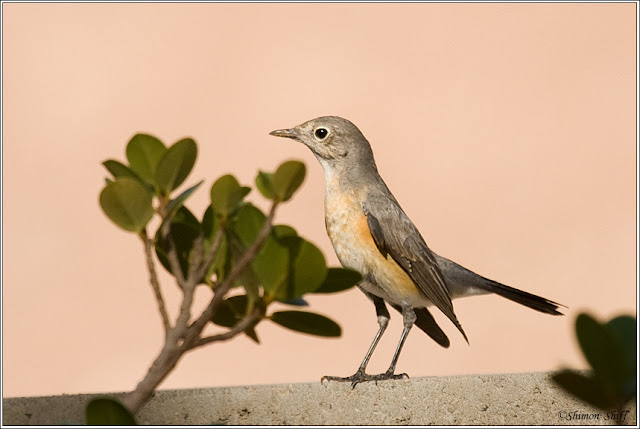 Later this evening I will head north to the British Bird Fair in Rutland (Marque 2 Stand 50-51) in order to promote the Eilat Bird Festival. Just before I leave home, I went for a short visit at North beach and K20 and found nothing new, except for the "regular" waders (Greenshanks, Little Stints, Ringed Plovers, Marsh Sandpipers, Redshanks...) and Terns (Caspian, White-cheeked) which were reported earlier this month already. A first Whiskered Tern for the season was the only nice addition. 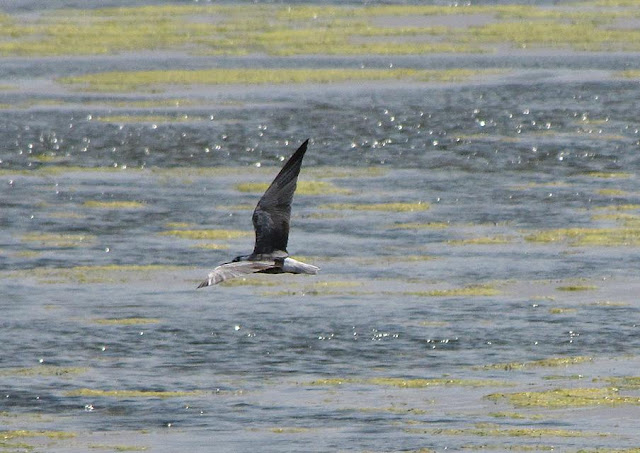 August is here and there are migrants all around.
Waders are getting more and more diverse though still in low numbers (tens of each) and on top of the species that I saw already earlier during July, there are new arrivals like Greenshanks, Marsh Sandpipers & the first Curlew Sandpipers.

Little Terns numbers have dropped but still there are few hanging around flying with growing numbers of White-cheeked Terns at N. beach. Surprisingly, a single White-cheeked Tern was seen today also on K20,flying around the 22 Caspian Terns which are present there for some time. 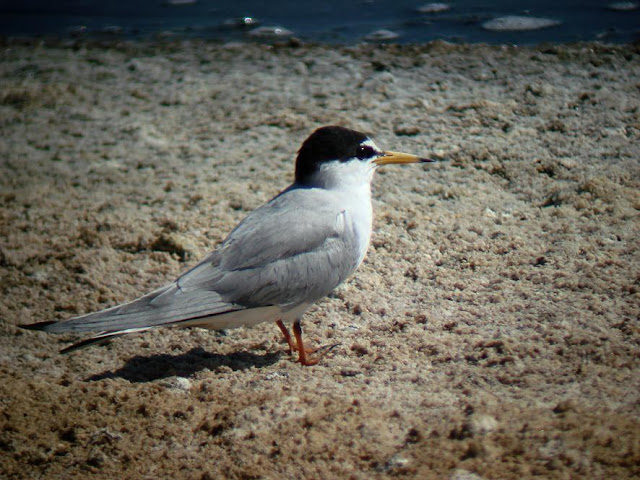 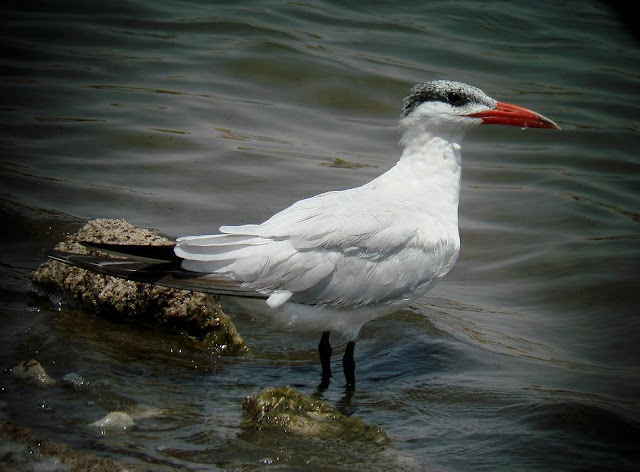 The first White Storks were seen on the first week of August (10-12 birds were seen in different places including these pair at Samar Sewage). First Eurasian Cuckoo's were reported from Samar (Yaniv Basher) and there are growing numbers of raspy "tick's" in the bushes coming from the Eastern Orphean Warblers. 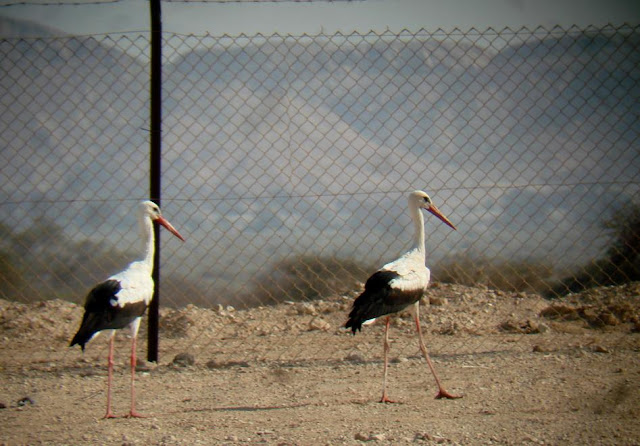 Sooty Falcons are doing well so far and I've already located 2 new possible territories which I will have to re-check later in the season to see if they are being occupied by a breeding pair.

One of my personal favourite Autumn signals arrived on August 6th when I had my first Yellow Wagtails (feldegg) for the season at K20. This species is breeding in very small numbers in Northern Israel (Hula Valley) and usually picks around Eilat only around the last two weeks of August, so it wasn't too surprising to see them, but still very pleasant.

Late afternoon, today, while walking with the dog and the kids, there was a nice strong southern wind. The combination of this time of year with these weather conditions may become very fruitful at North beach, so tomorrow morning I will try my luck there and hopefully will have some goodies to report later. Mean while, enjoy this wonderful atmosphere photo from K20 during this morning. 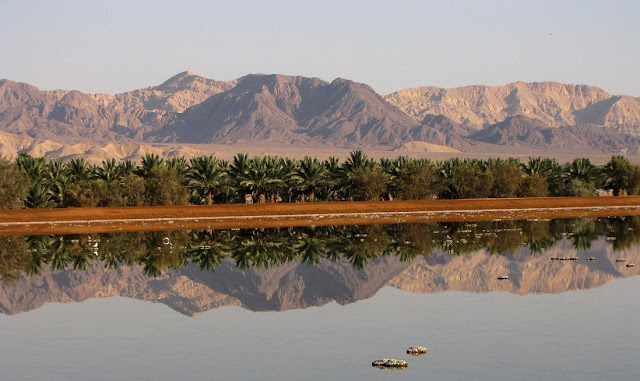