It has been a while since i last wrote anything, but there is so much work and so much to to see out in the field that i feel a waste to sit next to the computer.

Nevertheless here is a short summery of birds in the Eilat region:
This is probably the best Spring we had around Eilat in 15 years with both numbers and variety of species, bringing Eilat back to its best.

The bushes are filled with migrants: Sylvia's are all over (including many Ruppell's few Subalpine, still some Cyprus and many Lesser Whitethroats  and Blackcaps). In the City parks there is very good representation of many other passerines groups like Buntings and Redstarts as well as few Shrikes. Also, a very good wave of both Cyprus and Pied Wheatears is going through the region as can be seen in the last few posts... and few Rock Thrushs are also present. 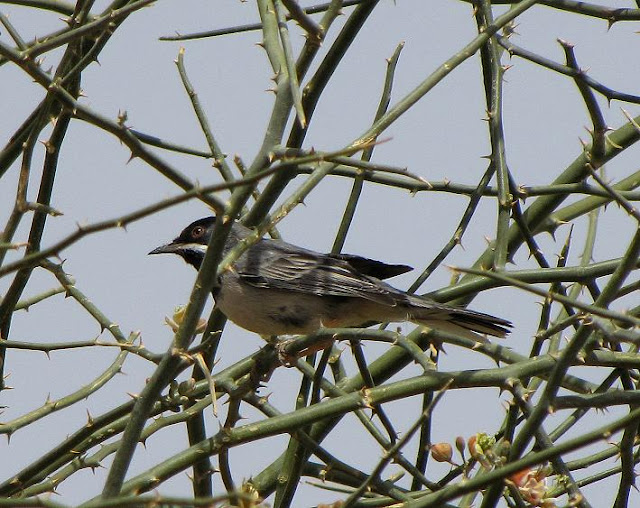 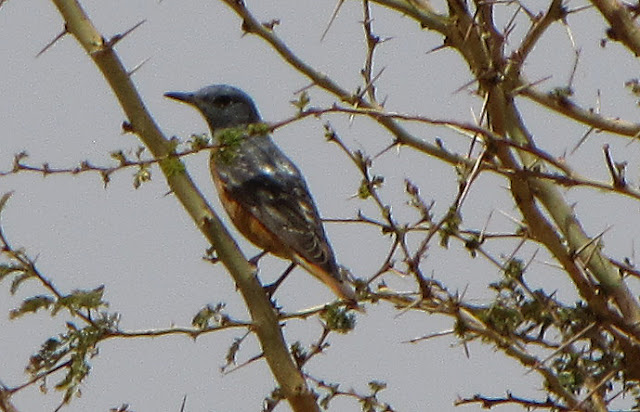 After 3 days of dust storm the sky were clear today and raptor migration was really kicking    with many Steppe Buzzards and still good numbers of Steppe Eagles. Also today 2 Osprey and a Greater Spotted Eagle flying north and more Egyptian Vultures  and Black Storks.

Yesterday I received a report that a probable "Basalt Wheatear" an endemic subspecies of Mourning Wheatear which is only known to breed in the Basalt desert of East Jordan and Southern Syria was seen up at the Ovda Valley by Itai Berger and Daniel Berkowic. 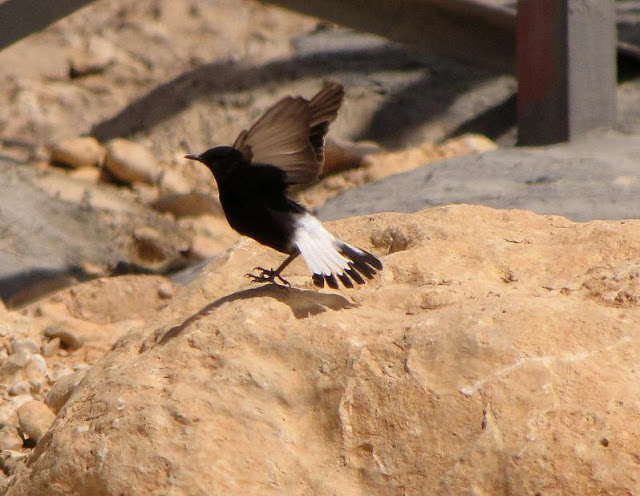 This bird has a very strange behaviour of crouching forward, which I never noticed with Mourning Wheatear and I usually associate it with Finche's Wheatear. Surprisingly when Hadoram Shirihai arrived and explained about the results of his current work on the morph, he mentioned the same behaviour as a very diagnostic feature. 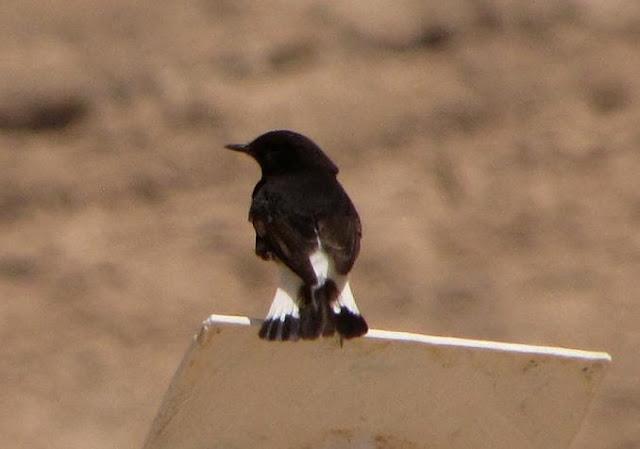 This is the 6th record to Israel (when accepted) and is probably on the way to be announced as a full species based on work carried by Hadoram Shirihai et al during these days.

I managed to relocate it today after a long search by many others and in few hours many of the visiting birders have managed to come and twitch the bird. 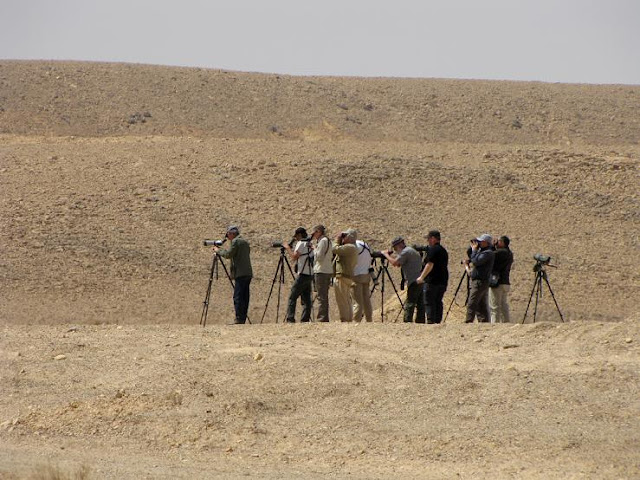 Up at Ovda Valley, there are still some 40 Thick-billed Larks and 10-20 Bimaculated Larks have joined the many Short-toed Larks And in Yotveta a beautiful adult Caspian Plover.

Back at the IBRCE, we were joined by Hadoram and together went through the re-description of the 'eilatea' subspecies of Sand Martins which is a tiny little bird and is probably also going to be split one day as a full species?!

It's just getting better...

The recent weather with all these southern winds and clouds of dust have settled and many migrants are evident all over.


On Sat' morning I took my young son, Raz who is only 2.5 years old to have a short drive and walk in the desert to see what can we find after the storm. A short walk it was but very productive nevertheless. We started at Km 33 where we had the beautiful song of a Hoopoe Lark and good views of both Asian Desert Warbler and my first for this season Black-eared Wheatear. In the sky, a flock of 250 Eurasian Cranes were heading north giving their very diagnostic calls.
Earlier in this morning, Avi was photographing nearby, a group of Thick-billed and Bar-tailed Larks (I hope that soon we will get some tastes of these...)


We than drove south and on our way spotted many Sylvia's including Ruppell's, Eastern Orphean and the most common Sardinain and Lesser Whitethroats.
When we reach the K 20 ponds, Raz was very happy to point all the Flamingos and was showing his first steps in identification when he asked "what are these Flamingos in the water which are not Flamingos"? aiming on a group of Shelducks...
Later we also spotted male and female Hooded Wheatears and beautiful Kentish Plovers. 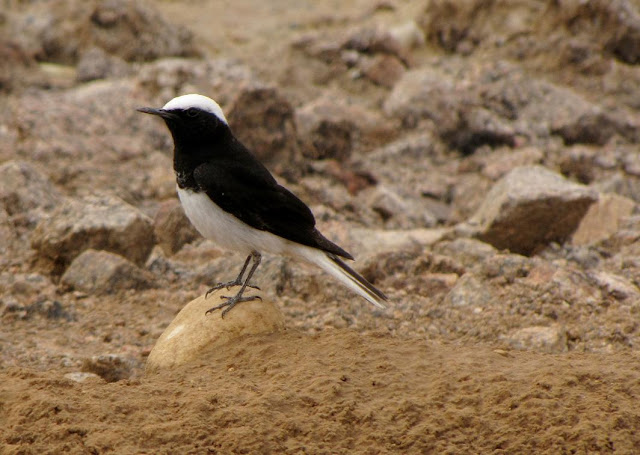 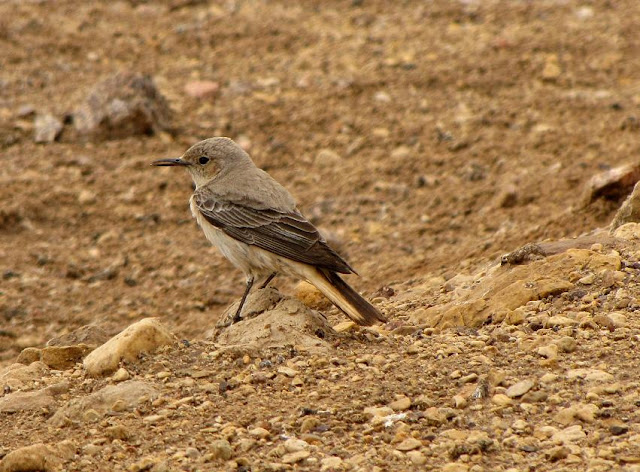 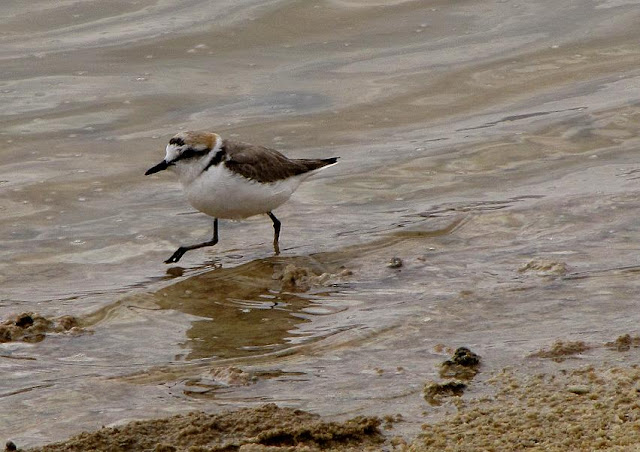 As we were driving to leave the ponds, I noticed a bush of Taily Weed Ochradenus baccatus filled with Sylvia warblers. In this single bush, we had at least 3 Cyprus Warblers (2 males and 1 female), Eastern Orphean, Lesser Whitethroats and a second female type Hooded Wheatear. 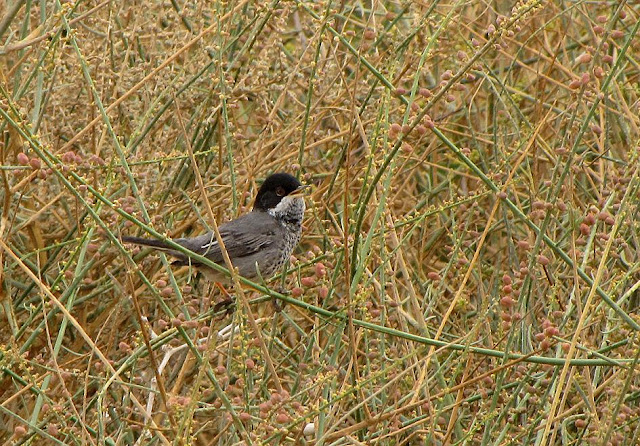 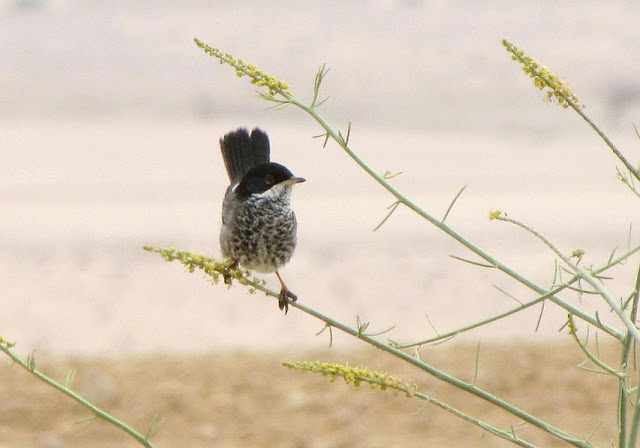 In the evening we scheduled to meet up with Will, the David's and Jason (who were having a great day up in the Negev), Rune who had a male Crested Honey Buzzard coming to roost at the Date plantation north of the IBRCE, to check the Yotveta fields for some night-life.


We ended this evening after very close encounters with two Egyptian Nightjars (first for the season), Pale Scops Owl - not often one gets to see these wonderful creatures hunting in a field (thanks to Shay for these superb photos of it when it perched), some 10 Stone-Curlews and great views of Golden Jackals, Red Foxes, Cape Hares and a possible Striped Hyena which was too far for confirmation. 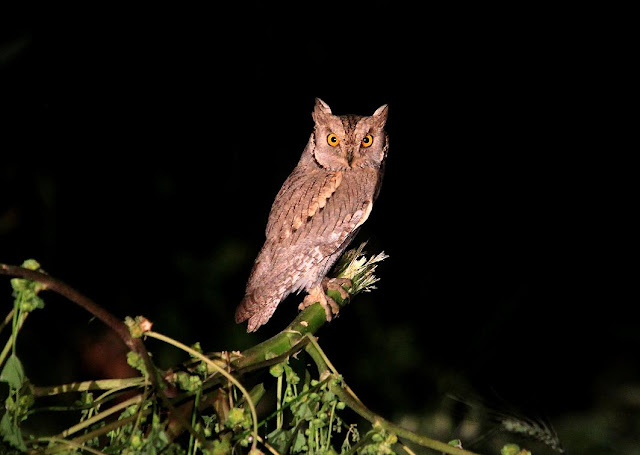 As much as we tried, we couldn't locate the Pharaoh Eagle Owl but hey, we need to leave something for their next visit...