Eilat and the southern Arava are such a unique place that there is almost a constant flow of migrants throughout the year and not always it is easy to understand on which directions are they heading?!


While Spring migrants such as Red-necked Phalaropes & Ringed Plover were still visible two weeks ago, last weekend at K 20, I had (together with Paul Redish and John ????) a lone Terek Sandpiper. I can't really say whether it was on its way north or south...

other than these, the first Sooty Falcons were present around their breeding territories this week and the local Striated Heron is hunting at north beach almost daily.
Cory's & Sooty Shearwaters are still present and so is the Brown Booby and a pair of each White-cheeked & Caspian Terns. 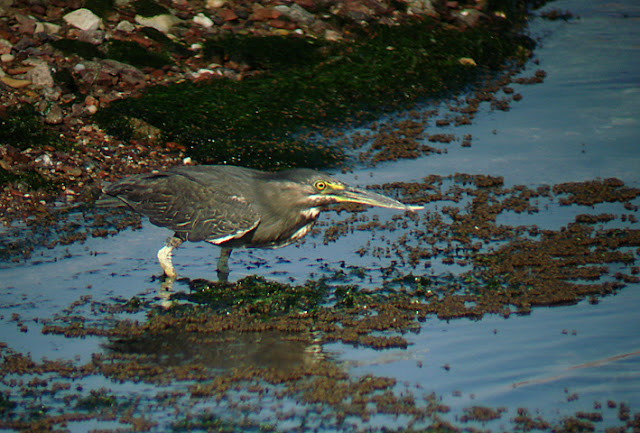 Yesterday, I had some time to look for Odonata, I found a small pool with 6 species: Oasis Blutail, Blue & Lesser Emperors, Broad Scarlet, Violet & Red-veined Dropwings.


Today I was surprised to find no less than 6 new Redshanks, 12 Wood Sandpipers and a lone Eurasian Spoonbill at the IBRCE salt pond. Since I check this pond daily, I'm sure that these are all migrants and presume that they are already on their way south.
One of the Redshanks was bearing a ring on its leg, but unfortunately I could not read any details on it. I wonder if this is one of the birds which were ringed the IBRCE ringing station in the past... 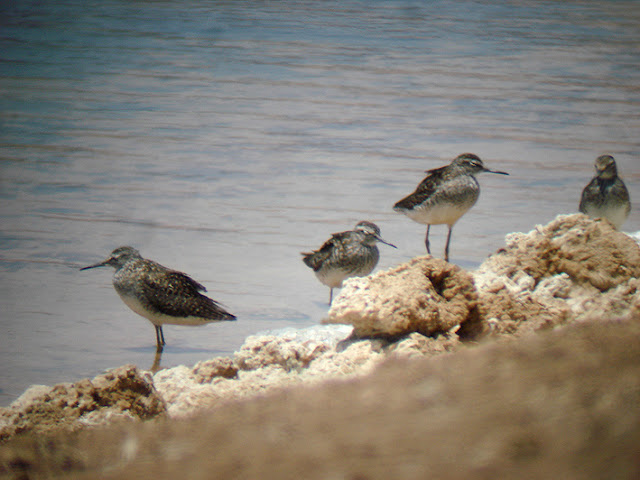 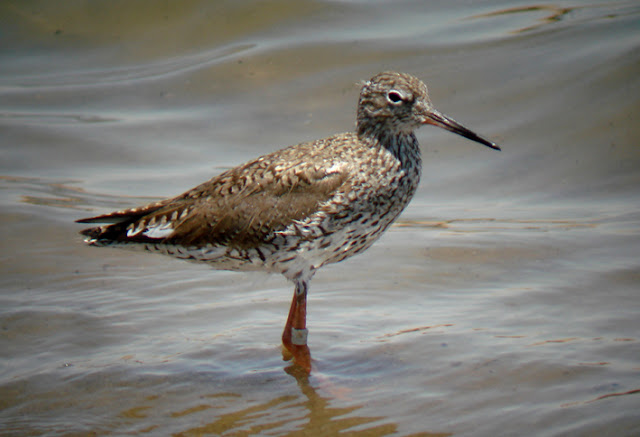 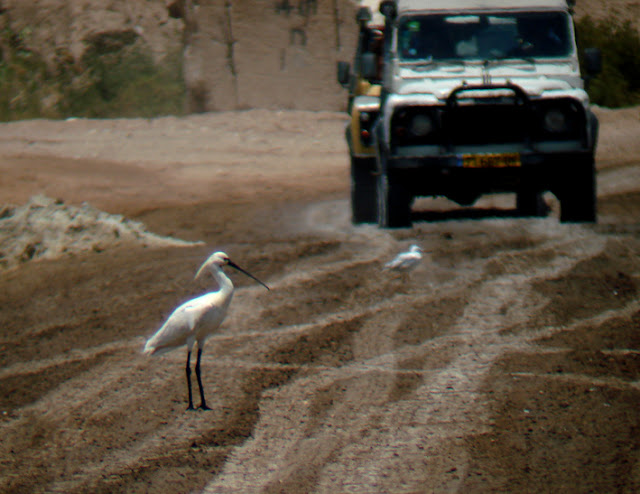 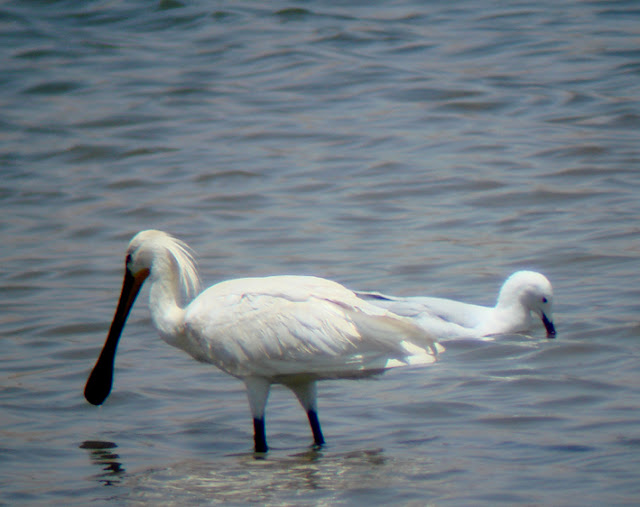 As I said earlier, Eilat and the southern Arava are probably the most interesting migration hotspot in the WP, there is always something around and if is not a migrant than it would be one of the local breeding species like this Egyptian Mastigure... 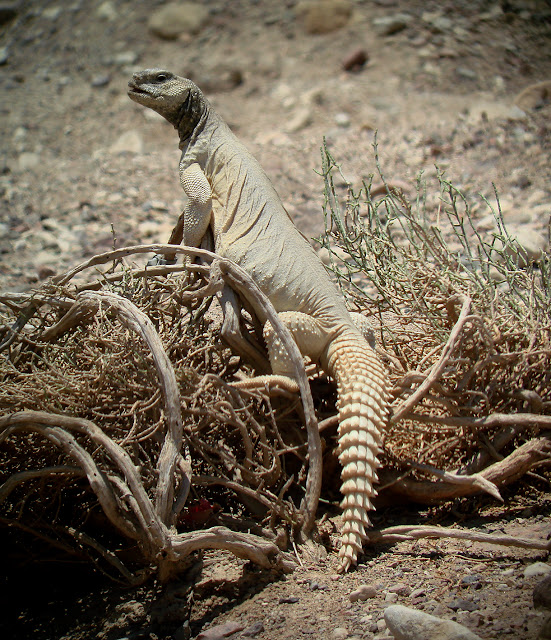 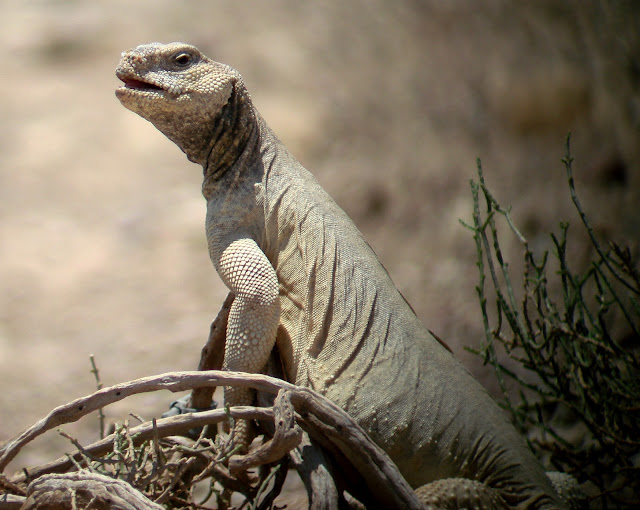 Not much is moving around Eilat and the Arava during the Summer (with daily temp' rising to 46 deg' centigrade I can't really blame anyone...) Nevertheless it is worth checking the Gulf of Aqaba for late passage of Terns and Gulls as well as searching for those early fledglings pelagic species.

Last Sat' I went with Avi and Ilan for a short morning boat drive, in search of those pelagic species and indeed we had groups of Common & Little Terns flying around and a lone Sooty Shearwater and Cory's Shearwater. Also around we had beautiful White-eyed Gulls in full breeding plumage and many 'tatty' looking Slender-billed Gulls in heavy moult. Earlier in the week there were reports of Bridled Tern but we couldn't find any. 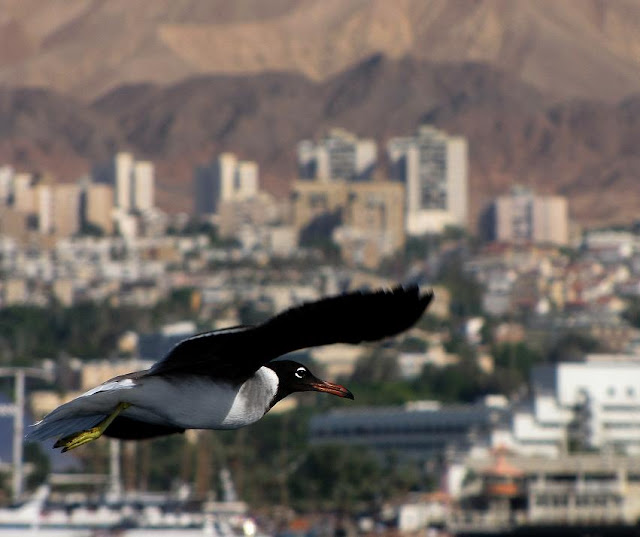 On Sunday morning I had a spare half an hour and I found 2 Arctic Skua's flying north inland. Yesterday, I've spotted an adult Arctic Tern flying among a group of 20 Common Terns almost exactly a year after I found one 1st summer at the same location.

So despite the heat, it is still interesting around and I hope that more will come soon.

Birding during April and May was still very productive with lots of migrants all over. The IBRCE ringing station was working very hard and surely the guys have broken some records with the amount of birds that they handled over the whole season and i just hope that after being so busy they will all have good memories from this magical place. I hope to see them all coming back one day. I am still waiting for the season ringing totals from Yotam and I’m sure that once he will finish pinching all the data we will get a full and interesting report.

While migrants seemed to slow down towards mid April, we still got some really nice waves towards the end of the month mainly of waders and raptors, but also passerines (as will be published later by Yotam).

Marsh Sandpipers were aggregating in big numbers at K20 and at the IBRCE ponds and the numbers of Red-necked Phalaropes were also rising to a record number of 42 in a single group. The first Broad-billed Sandpipers arrived on the April 10th and later were seen in numbers which rose to 20 and more. Interestingly, at the same dates we already had our first fledged Kentish Plovers running around at K20. 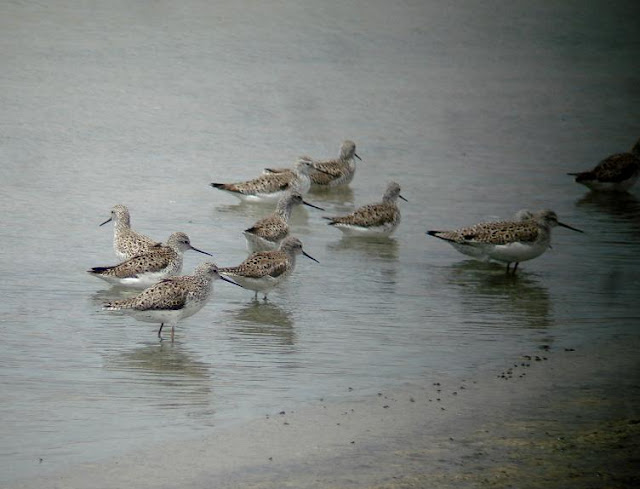 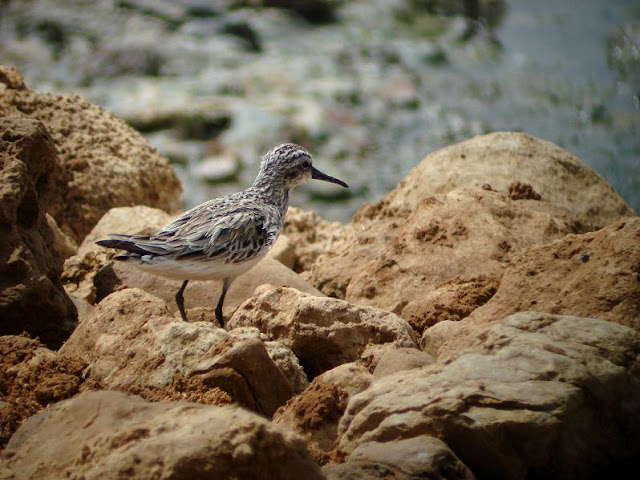 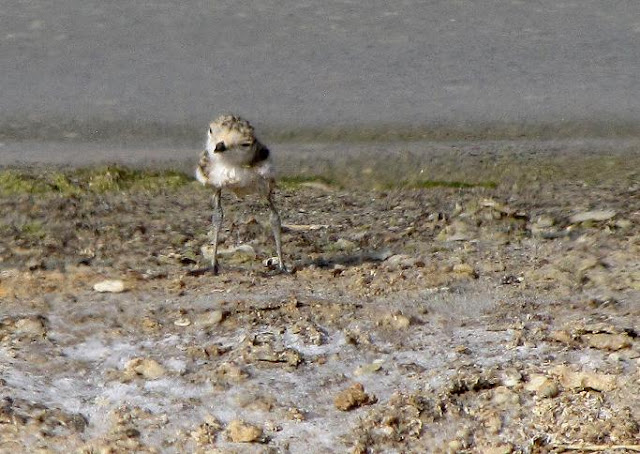 This season was exceptional with Caspian Plovers and indeed, 2 late birds appeared also at K20 on April 15th (becoming the 12 and 13 individuals I’ve seen in person only this spring). 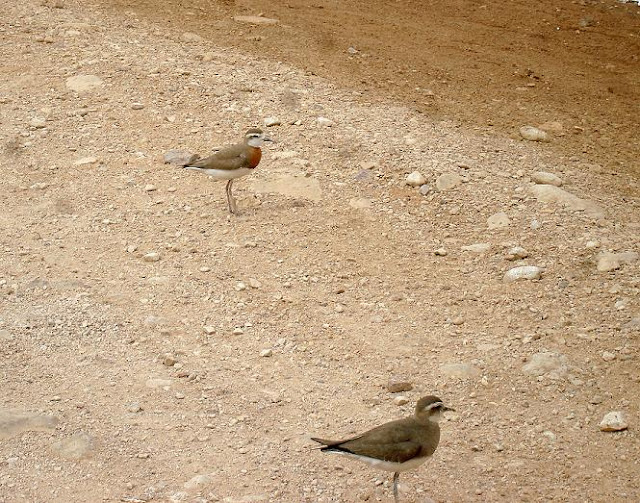 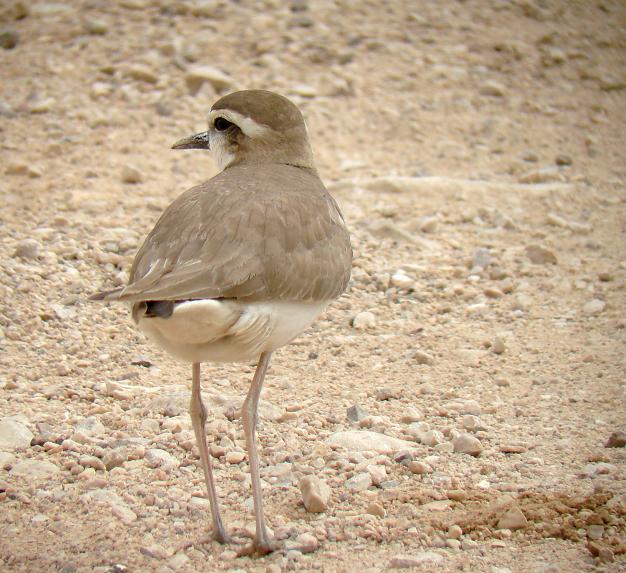 A Eurasian Curlew was seen on the 16th April and Lichtenstein’s Sandgrouses were pairing in breeding territories. 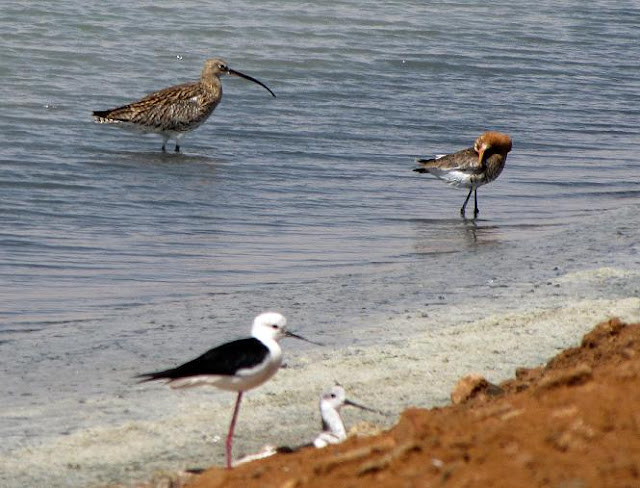 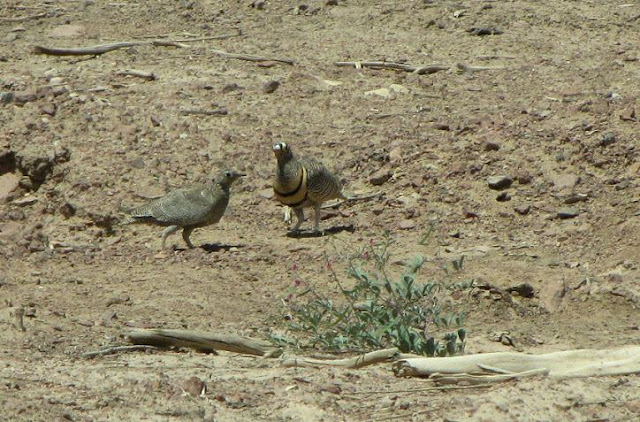 Towards the end of April more and more groups of White Storks were seen migrating together with big thermals of Steppe & Honey Buzzards as well as Levant Sparrowhawks. While it is always a treat to see birds landing in the middle of the desert to roost, this small group of White Storks was a nice surprise while searching for Hoopoe Larks territory. 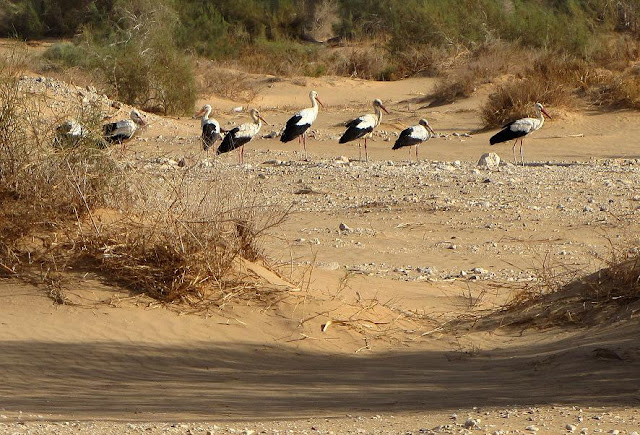 Rock Thrushes were still moving through the Arava till late April and on May 1st while birding around Yotveta, I found this wonderful Dunn’s Lark which was later photographed by Yoav Perlman who was nearby and could come for a twitch. 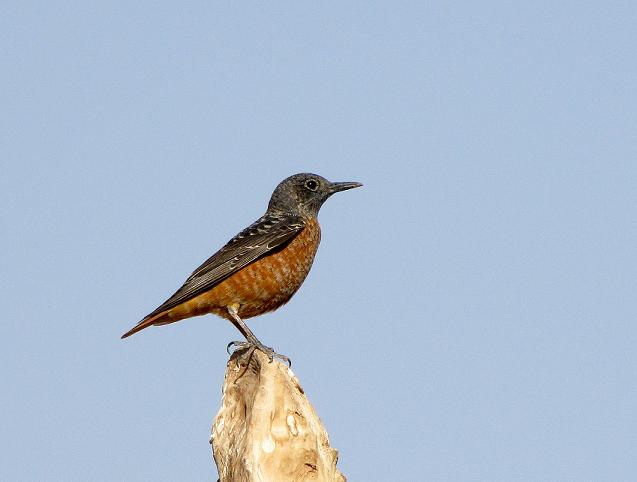 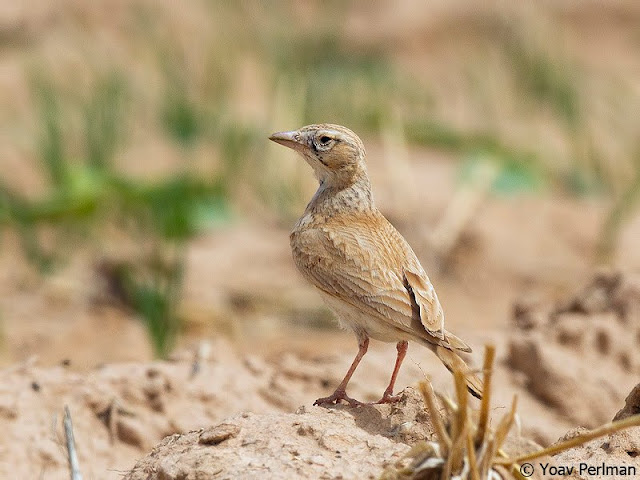 A late Montagu’s Harrier was a nice surprise on the first week of May, but even more so was this lone Terek Sandpiper which are always not too common in Israel both joining flocks of Gull-billed and White-winged Terns. 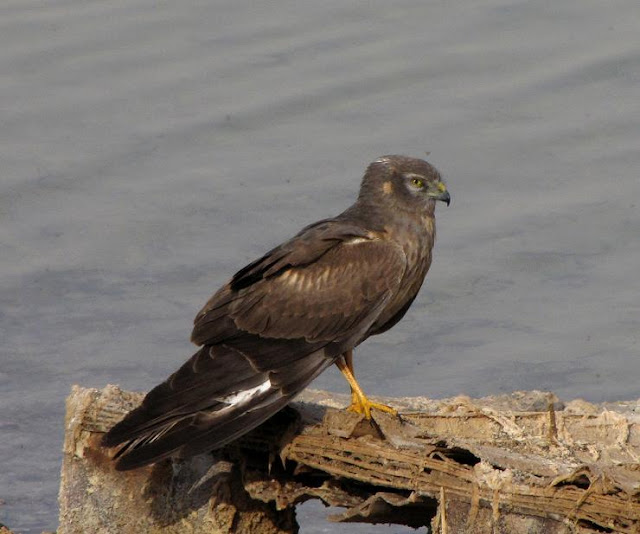 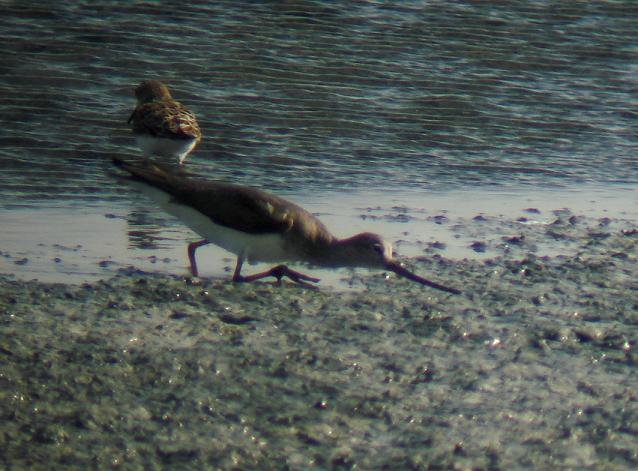 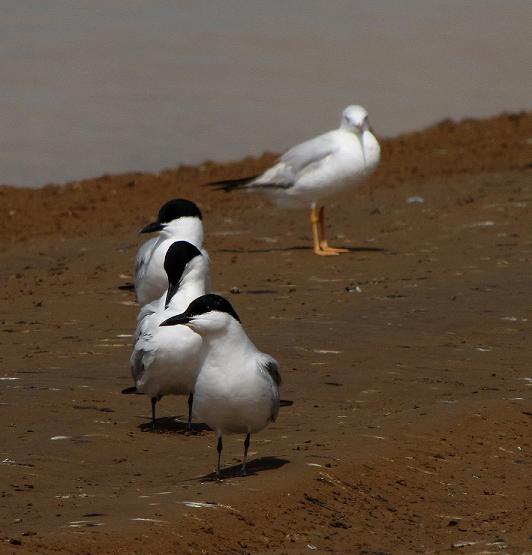 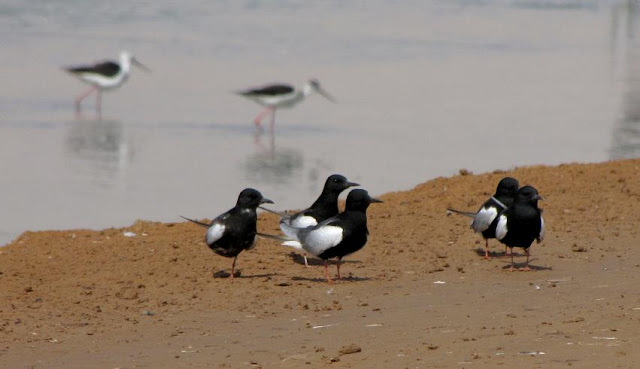 A very interesting bird was found by Noam Waiss and John Kormendi (sorry if there are spelling mistakes) swimming on K19. It was one of the most interesting identification debate I had for some time, going back and forth from Common to Barrow’s Goldeneye and at last deciding that this is a 1st summer male (!) Common Goldeneye. At the same time more and more intriguing Pratincoles were seen by different people at different locations and I presume that we will have much on this in the future... 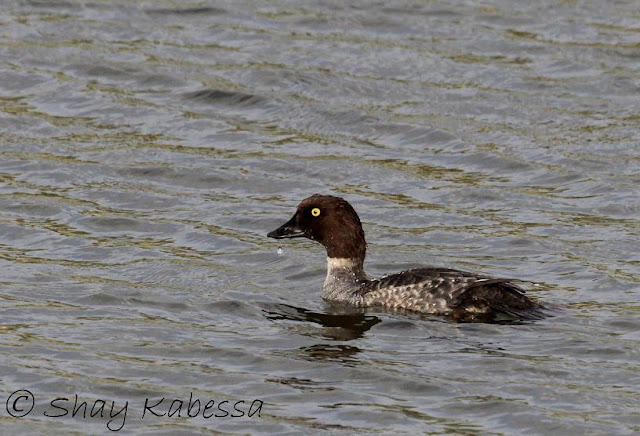 Our local species were already in full breeding during early May and at the same time Eurasian Honey Buzzards were flying all around with mornings of thousands of birds taking off from the date plantations along the Arava. Among them were few Oriental Honey Buzzards I managed to get a nice glimpse on few of them, but surely this adult male was the most attractive one (sorry for the poor quality of photos...) 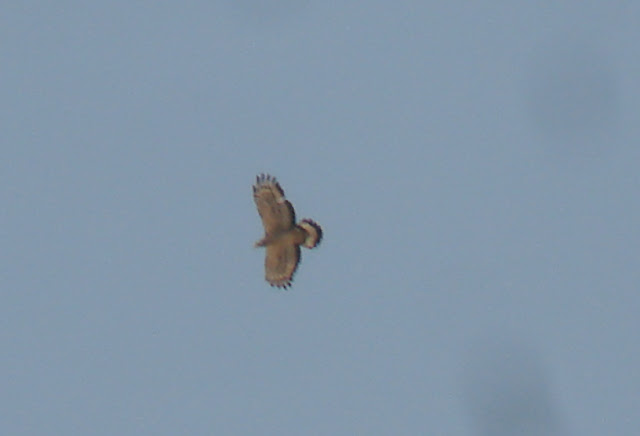 On May 17th I met Mr. & Mrs. Deighton’s from South Africa at Holland Park and found a nice Barred Warbler which they were looking for. I than directed them to Neot-Smadar sewage to look for some other species they were after. Not only did they found the Upcher’s and Olive-backed Warblers around, they managed to send rare bird alert regarding the most cooperative Black Bush Robin i’ve seen in many years... 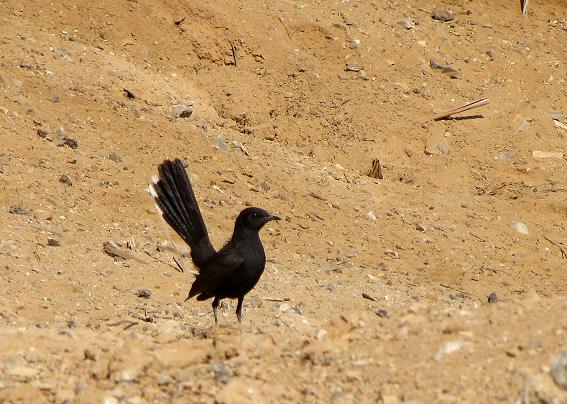 A Terek Sandpiper which was seen on May 30th represent the 3rd for the season that seemed to have completely finished now, leaving us with these great breeding species which are colouring our beloved desert. 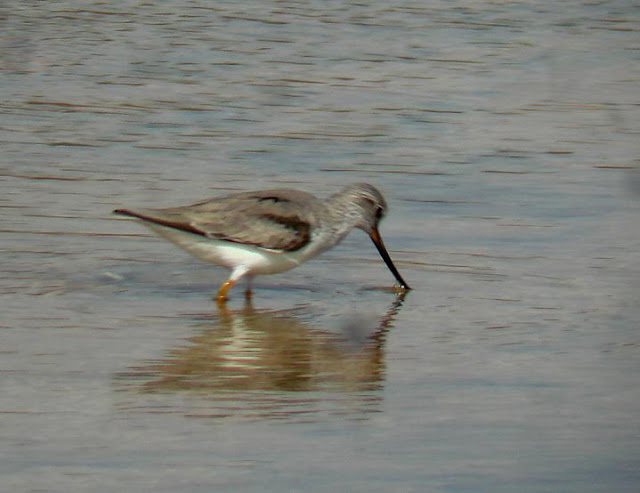 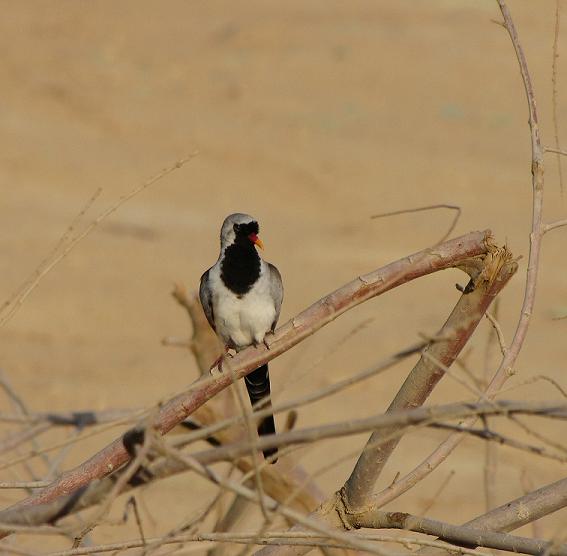 On June 9th, a visiting birder (Dudu Raved) had the first Bridled Tern flying around, soon we will have more of these flying at the gulf of Aqaba and since July is just around the corner, autumn migration is surely going to be another great time...
פורסם על ידי Itai Shanni ב- 5:30 PM 0 Comments

Its been much too long and I don't have any excuses...

but just to break the ice again (which is really needed now around the boiling Arava), I thought to share this photo of our own Avi Meir who is enjoying the local breeding season of Little Green Bee-eaters. I hope to update soon and put some summarizing data of our last Spring which has been the best in 15-20 years both for bird numbers and bird diversity. 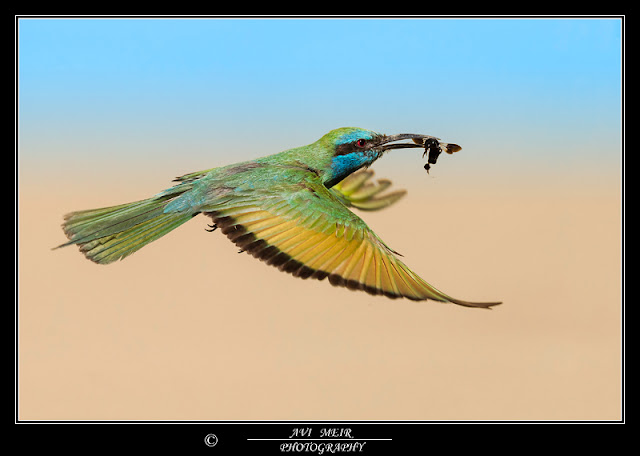