Spring 2013 is almost over for us here in Eilat and it won't be long before we shall start looking into Autumn migrants coming back already in mid Aug'...

This last spring was a very strange one with relative low numbers over whole, while some species had a very high peak mainly towards the end of the season.

There are still few waders hanging around with Red-necked Phalaropes, Broad-billed & Curlew Sandpipers and Little Stints being the most common. 2 Sanderlings and 3 Greater Sand Plover were a nice addition of species during the beginning of the week. 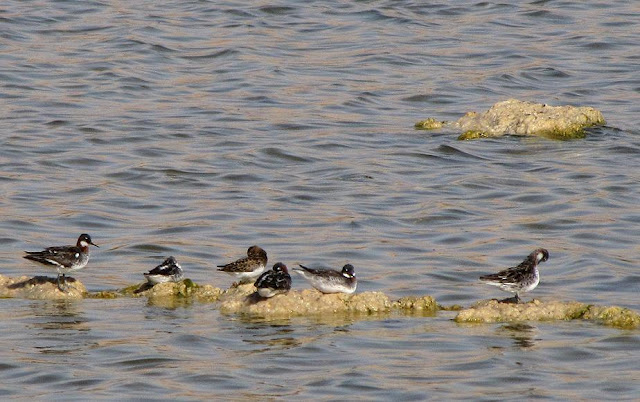 At north beach still few migrants flying through with Common & Little Terns  the most common but also Oystercatchers, Sooty Shearwaters and the first White-cheeked Terns all seen almost daily.

Markus Lampinen our dedicated volunteer who had to carry the ringing station throughout the season on its back with the help of many others, have left today back to Finland and in this opportunity if would like to express our big thanks to Markus and the rest of the volunteers (Tzadok, Liat, Jan, Arnold, Eran, Roger, Will, Yochai, Yael, Roni, Ron, Yaara, Merav, Sylvia, Noa, Utte, Shachar and all whom I forgot to mention) who made this season a successful one despite all the obstacles on our way!
We will be happy to see you all back with us in the future.
Itai 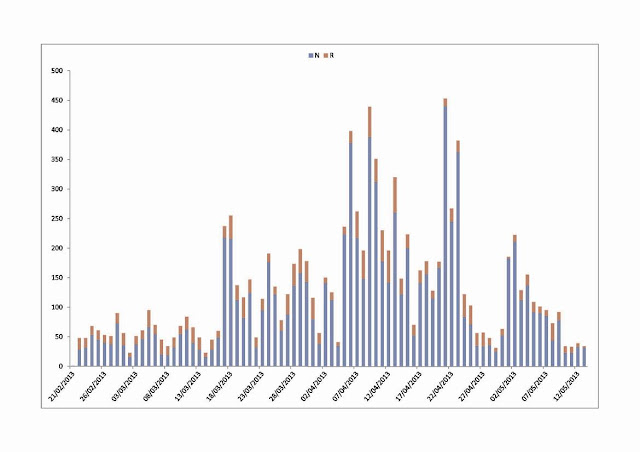 Below is a summery by Markus, just before he left back home, this after noon...

"The end of the season is here and I must head back Finland to finish my studies, earn a lot of money and to do some ringing and birding there.

Last two weeks haven't been very busy with ringing but still some nice species like Olive-tree and River Warblers have been caught. Also some Marsh and Barred Warblers were still around this week. One of the season's most surprising birds was caught on May 10th when a female Sand Partridge flew in one of the pond nets. What a silly bird.
Another not-so-common catch was a Spur-winged Plover that also was hanging in a mistnet during a swallow roost catch (check its spur over its cheek!). 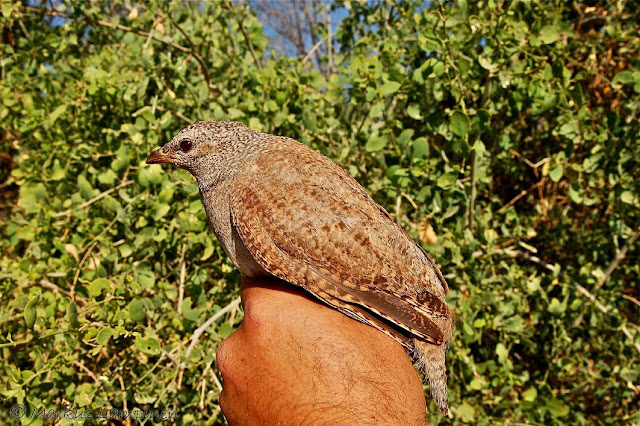 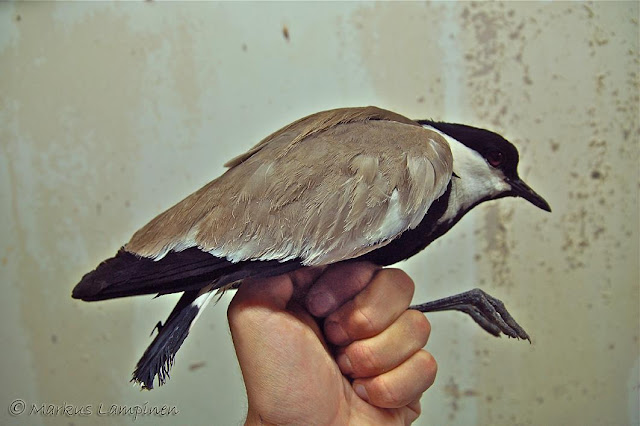 In the field it has also been pretty slow, but still last week I saw a stunning adult male Crested Honey Buzzard migrating over the park and also twitched two Terek Sandpipers from the saltpans. At North Beach we saw three White-cheeked Terns, 3 Oystercatchers and a few Sooty Shearwaters. A female Black-headed Bunting was also found from K20 today while Barbary Falcons were hunting over the pools. Quite nice!
Last evening we also re-checked the daily drinking routine of Liechtenstein's Sandgrouse at K19. Altogether three (1 male, 2 females) individuals arrived. In the end of April me and my Finnish friends visited the Dead Sea area and saw a lot of great birds including of course Nubian Nightjar, Hume's Tawny Owl, Sinai Rosefinch and Striolated Bunting. Thanks Yoav & co for good company!

Since this was the first time for me in Israel there really was a lot to see and I didn't actually get bored at any point even though the season was not the busiest one. If I should pick up some highlights of this season a White-throated Robin would certainly be one of the top birds. I'm also still seeing dreams about the 17 Blue-cheeked Bee-eaters we caught during the season. They are such a beauties! 27 ringed Rueppell's Warblers, 4 Olive-tree Warblers, 3 Namaqua Doves, 5 Little Bitterns, 5 Golden Orioles and a Spotted Crake also especially thrilled me. And of course it's always a great experience to handle any kinds of raptors or owls. Handling over 200 Eastern Olivaceous Warblers makes also a life bit easier when facing such a bird for example in Finland where it shouldn't occur.

In the field I really enjoyed of all the species at the Dead Sea area but also Crested Honey Buzzards, Thick-billed and Temminck's Larks, all Sandgrouse, Mourning Wheatears, Black Bush Robins, Pharaoh Eagle Owl and Pale Rock Sparrows only to mention few of them. During the three months I managed to see altogether 259 species here in Israel, mainly around Eilat area. Still some species like Ménétrie's and Cyprus Warbler, Pallid Scops Owl, Upcher's Warbler, Sooty Falcon and Egyptian Nightjar are waiting for the next trip to show up for me.

Finally I really would like to say thank you to all the wonderful people who have been helping, accompanying and having fun with me here in Israel. I have learned a lot about ringing, identification and Israeli culture during this trip and I know this won't be the last time I visit here.

Especially I want to thank Itai and Tzadok who guided me to work at the station and always took a good care of me. It was a great pleasure to work with you. You were like parents for me during this season. You may decide yourself which of you is mom and which dad :)

I would like to thank also Arnold, Eran, Jan, Luc, Re'a, Roger, Ron, Roni, Tom, Yaara, Yael, Yohay & Will for staying and ringing with me here at the station. It was great fun!

Thanks go also to Anthony, Jon, Liat, Limor, Maor, Merav, Noa, Ofir, Shachar, Sylvia, Utte & Yotam for helping me with ringing and other stuff. Life would've been much more difficult without you.

And last but not least thanks for my Finnish friends Emma, Esko, Hannu, Jände, Miksu, Petteri, Roni (again) & Tomppa for birding company and help also. You're always fabulous! 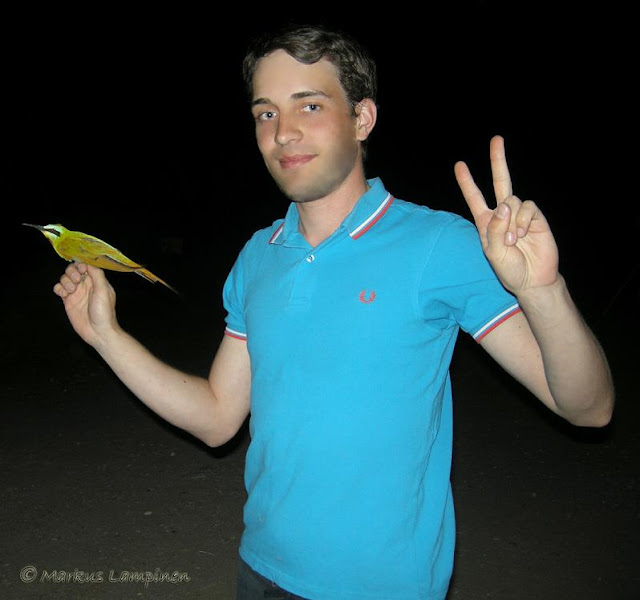 Migration on the move again

After several days of  low numbers, migration has decided to show itself once again.
over the last few days we had good numbers both in the field and at the IBRCE ringing station. A very big wave of Red-backed Shrikes, Thrush Nightingales and Barred Warblers all over with amazing numbers trapped daily (numbers represent total new birds for the season respectively - 63, 72, 41). Also a late wave of Whitethroats with 28 new birds between 2-3 May...

A very unusual wave of River Warblers which are considered rare in Israel, nevertheless are being reported from all over the country this year and in our region at least 3 different individuals (Elifaz, Neot Smadar and the IBRCE). 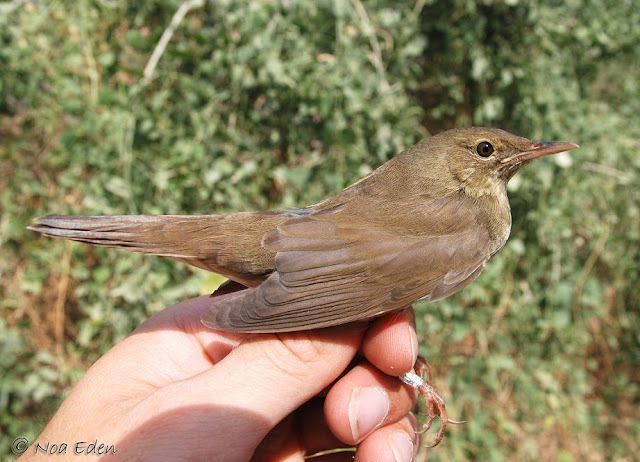 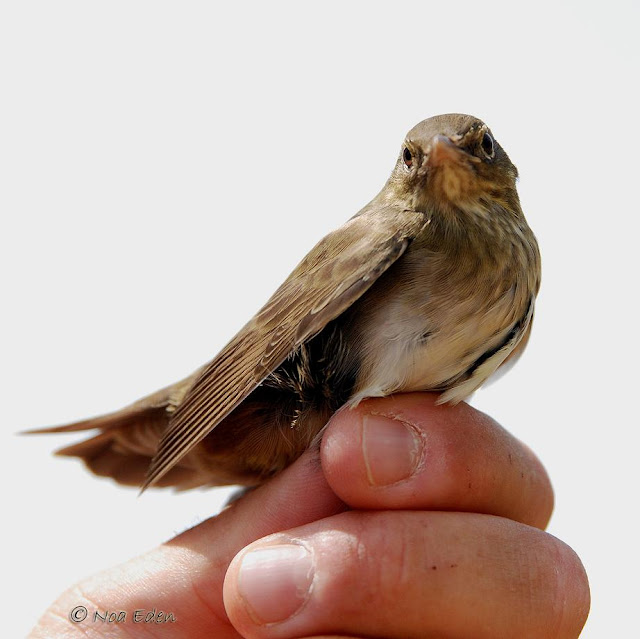 Honey Buzzards are streaming in full gale and among them there are Oriental Honey Buzzards which are found almost daily. Last Friday while guiding the Southern Arava Bird Club (SABC) we had 2 beautiful males and another one over the ringing station earlier this week. 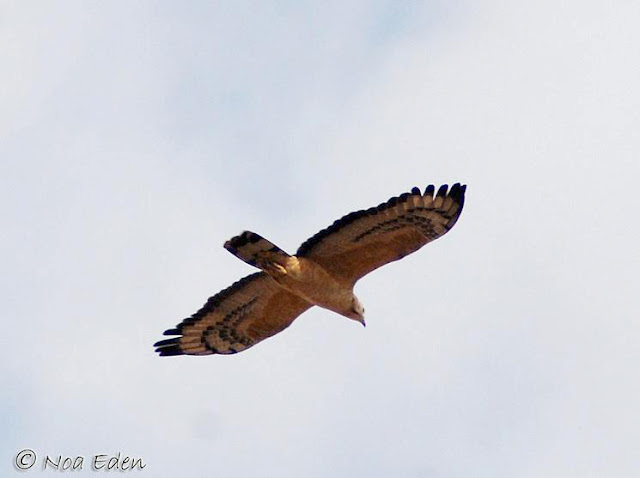 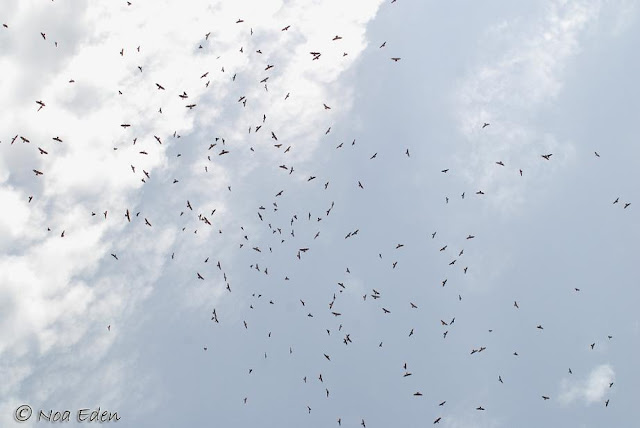 This year (as said already) is a behaving very strange and a late Pallid Swift and Black-eared Wheatear were a great surprise to the dreamteam in the nets. 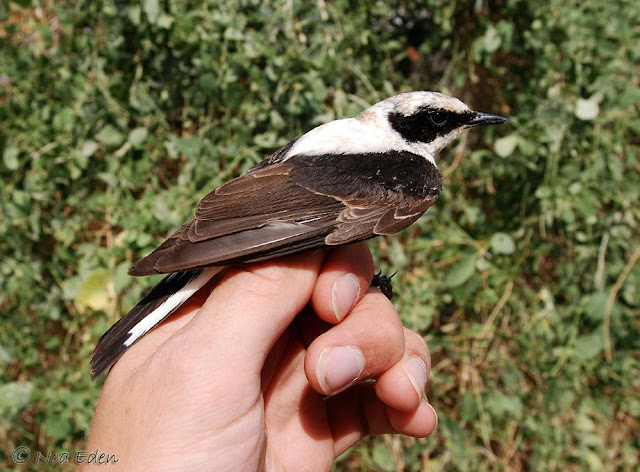 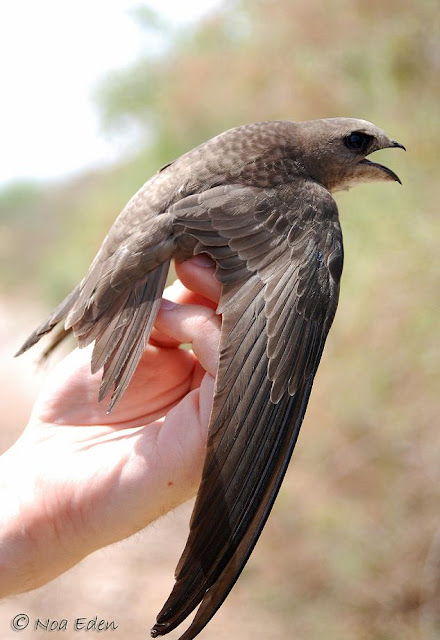 All the resident species are in full breeding and some are already on their second round... 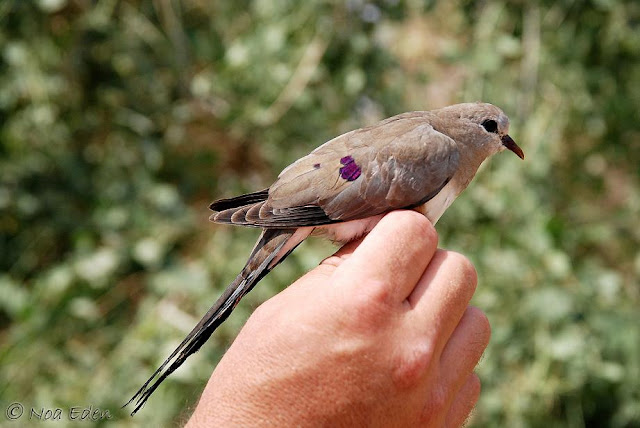 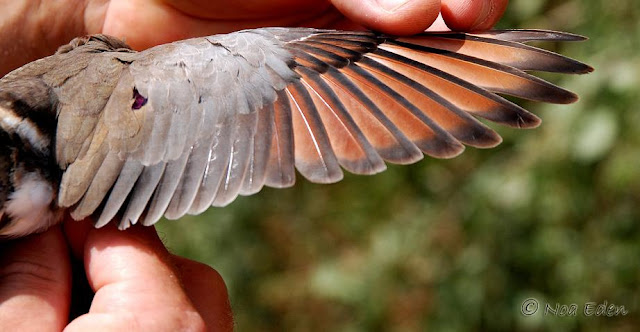 While we were busy ringing, I got a phone call from Frank Mofet who was observing 2 Terek Sandpipers in the salt ponds south of the IBRCE (found earlier by Bark Granit et al). He also reported of a Red-breasted Flycatcher at Holland park on the Fri'...
I must admit, that I've been scanning K20 over the last few days in search for the Terek Sandpiper ,as it is usually arrives in this time of year ... when Shachar heard about it he rushed to get a very long distance record shot and while on it he reported of 4 Oystercatchers (again not a common species around here) from K20 yesterday. 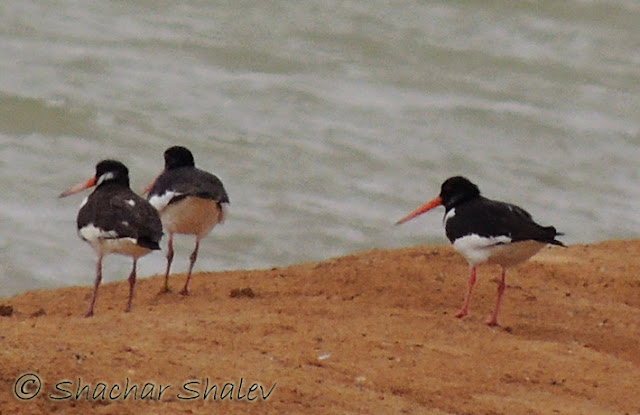 The weather seems to be stable now but we hope that this is not the end of the season. Stay tuned for the last summery report by Markus which should be written towards the end of his season sometime next week...