This introduction is based on the Guide to the Birding Hot-Spots of Southern Israel by Hadoram Shirihai, James P. Smith, Guy M. Kirwan and Dan Alon which was published by the Society for the Protection of Nature in Israel (SPNI) in June 2000.


Israel, and particularly the Eilat surroundings, has ranked among the top five
foreign destinations for British and European birders for many years. Sometimes described as the ‘jewel in the crown’ of Israeli birding, Eilat is a fine and logical place to begin any desert birding tour.

Extraordinary concentrations of migratory birds use the area, making Eilat one of the busiest migration areas in the world. The largest bird movements occur in spring (March–May) and while autumn migration is less impressive, many interesting species still occur at this season.

In addition to migrants, Eilat offers a rich and varied local avifauna, comprising of desert species, tropical species typical of the Rift Valley, Mediterranean and Red Seas. Finally, Eilat has a proven record for attracting vagrant and accidental species, with new species for the country and the Western Palearctic recorded almost annually.

For most birders the real spectacle of migration is best illustrated by the soaring species such as pelicans, storks and raptors. Most are reliant on warm air thermals rising from the desert floor and as such, are best looked for during mid-morning and late afternoon, often being too high to observe during midday. The numbers of such soaring migrants are massive with estimated totals of 20,000 Black Stork, 500,000 Honey Buzzard, 500,000 Steppe Buzzard, and 10,000 Eurasian Crane passing through Eilat each spring.
While Steppe Eagle passage has declined seriously from the counts of 75,000 plus in the mid-1980s, it is still spectacular at c. 20,000 birds per season.

Exploring the surroundings of Eilat will give you plenty of scope for encountering your first classic desert birds, while a trip to the mountains at the edge of town will bring Little Green Bee-eater, Desert Lark, Pale Crag Martin, Blackstart, White-crowned Black Wheatear, Scrub Warbler, Arabian Babbler, and Brown-necked Raven. Birds such as Barbary Falcon, Liechtenstein’s Sandgrouse , Hooded Wheatear, Sinai Rosefinch, and House Bunting are also found in the mountains but usually require more extensive searching. 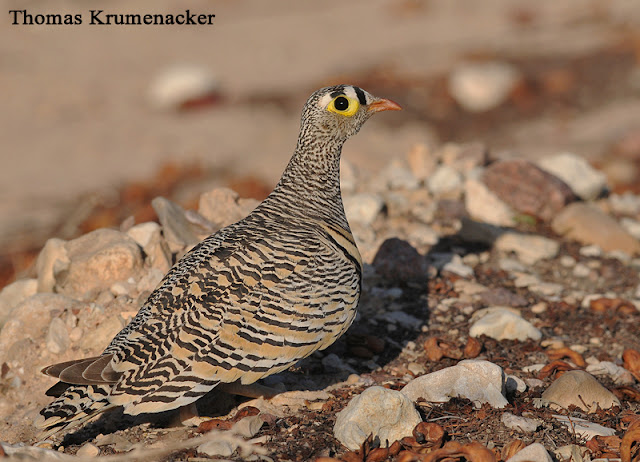 Eilat north beach, at the head of the Red Sea, offers the opportunity for observing a range of species rarely encountered elsewhere in the West Palearctic region such as Brown Booby, Green-backed and Western Reef Herons and White-eyed Gull. At peak season, birders gather here in their 100s and a great deal of information is exchanged. It is also an excellent place to see rare tubenoses and terns, which penetrate north along the Red Sea from the Indian Ocean and beyond.

Inland, the southern Arava Valley possesses a rich mosaic of salt pans, fields and plantations that not only support highly localized species such as Namaqua Dove, but also attract millions of migrants each year. Thorough exploration of all the habitats around Eilat can absorb many rewarding days of birding. Further north, the now famous lark site at km 33 and km 76, will hopefully provide you with views of such sought-after species as Hoopoe Lark, Bar-tailed Desert Lark, Thick-billed Lark and Desert Warbler during winter. Kibbutz Lotan and Neot Smadar have become exciting destinations in which to go birding. Both sites are rapidly developing a reputation for attracting rare and unusual species, and also as reliable places to see species such as Barbary Falcon, Hooded Wheatear and Desert Finch. 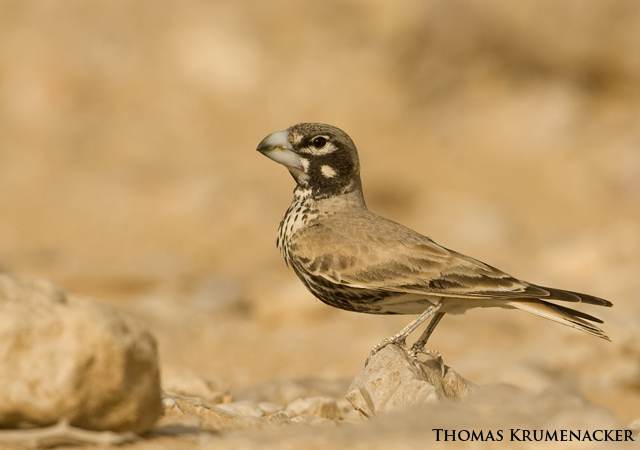 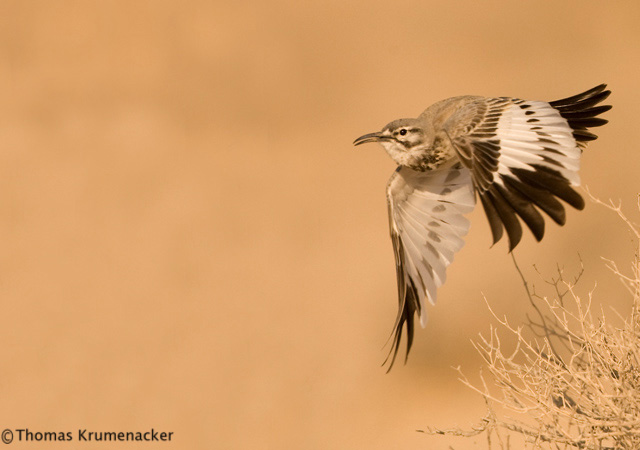