Another day at the IBRCE produced a good number of Chiffchafs and more Savi's Warbler. Steppe Eagles were moving in lower numbers today (or because the wind has reduced, they all went higher in the sky?!). Dead-sea Sparrows are becoming exceptionally beautiful at this time of the year and it is a real treat to handle them. 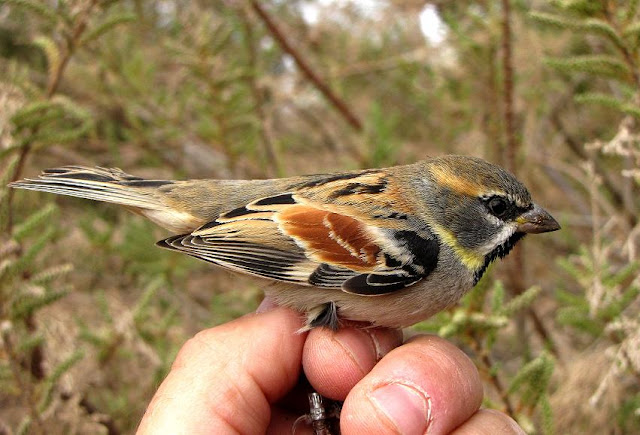 Towards the end of the morning ringing session, I was joined by Rune from Denmark who has been birding the country for the last 5 weeks and has 2 more to go...

Yesterday we both enjoyed the great stream of Steppe Eagles and today we were planing to try and find the Sociable Plover which was found yesterday by David Schoneveld at Yotveta fields. This was a Life bird to Rune and I was very happy to help him find it.

It didn't take us long before we found the bird, exactly at the same spot it was reported yesterday by David and also earlier this morning by Liron Ziv. It is such a privilege to see this species in its breeding plumage and enjoy these very close encounters. 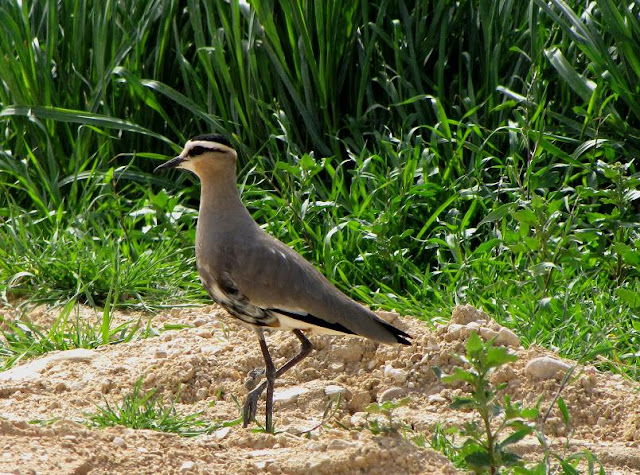 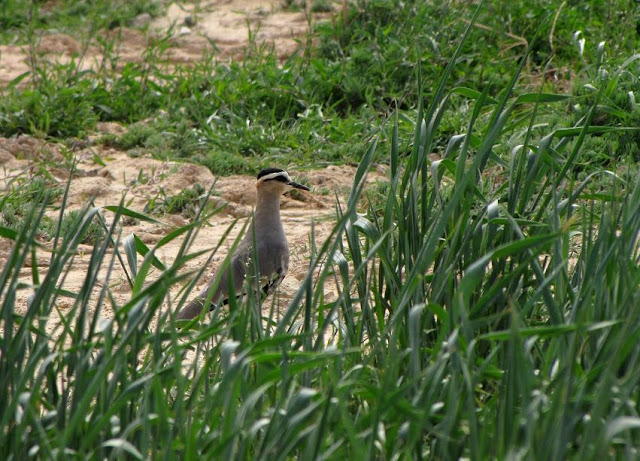 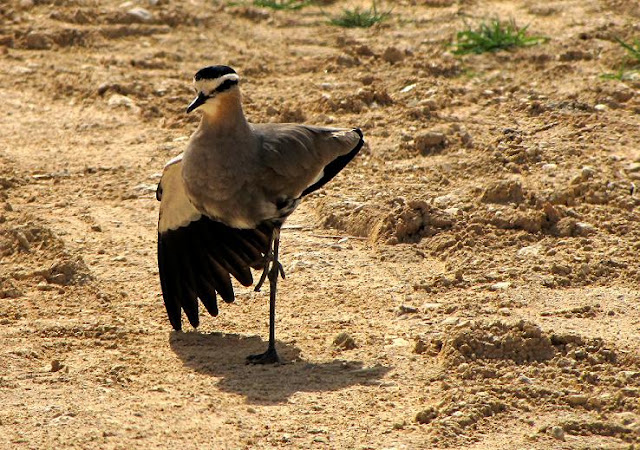 On our way back towards Eilat, we decided to check few more spots along the Southern Arava and not surprisingly, we found very few birds moving around in the heat of the day. Note worthy was a possible Buff-bellied Pipit among the many Water Pipits which we saw in a very bad light condition and without the scope at Elifaz Sewage.

But, as we drove around Samar Dunes, we stumbled upon a pair of Hoopoe Larks a species which was one of Rune top desires. Another Life bird! 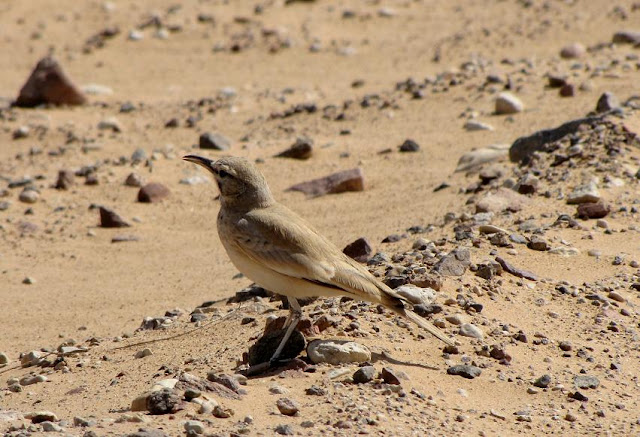 When we headed back home, we had a group of Dorcas Gazelles around Ein Evrona and  I was wondering to myself, which species is more 'sexy' to open this post and couldn't decide. Any ideas? 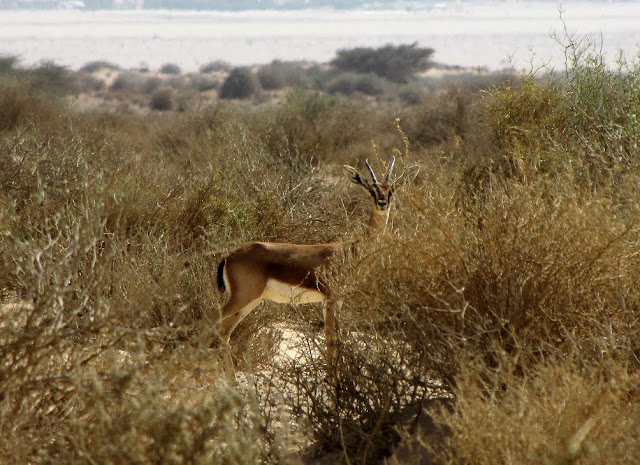 This time of year is exceptionally thrilling for me; while the wintering species are still dominating, there are many "firsts" for the season that appear daily in different corners of the Arava and some of our breeding species already have brood-patches...

During the last few days numbers of both Lesser and Common Whitethroats, Chiffchafs and Sedge Warblers have risen both in the field and at the IBRCE nets. The skies are filled with thousands of Common and Pallid Swifts as well as huge numbers of House Martins. 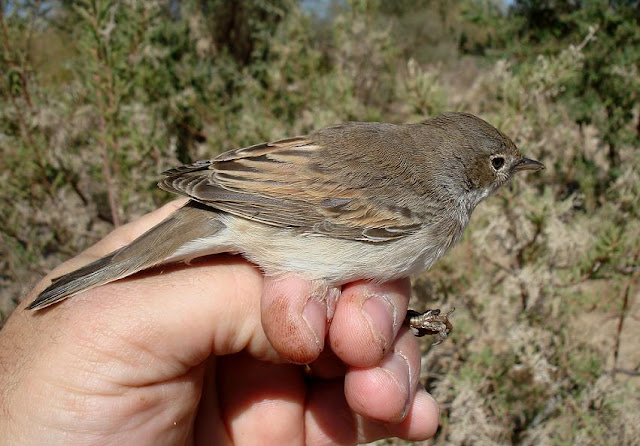 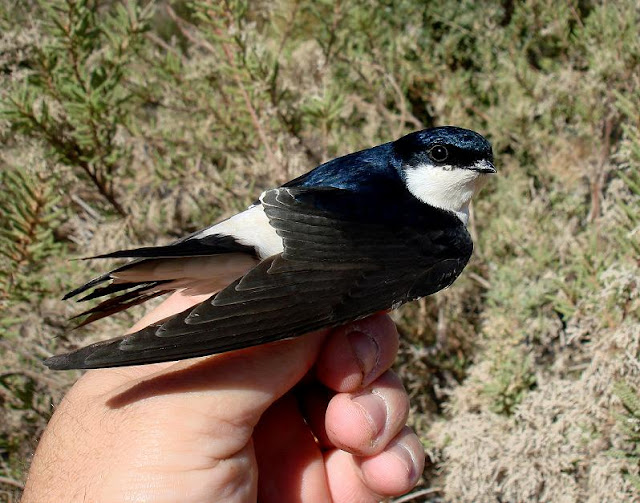 Around Yotveta, the first Yellow Wagtails are joining the many Water Pipits and Bluethroats which wintered around and almost everywhere, one can see the first wave of Isabeline Wheatears.

At K20 there is a constant rise of waders (Ruffs, Greenshanks, Green Sand's) and beautiful Kentish Sandpipers in full breeding plumage. The most interesting wader though is a Golden Plover last Wed'...

At N. Beach still one Med' Gull together with the many White-eyed, Black-headed and Siberian Gulls while the many Slender-billed Gulls are changing into beautiful pinkish plumage
There are no signs of the Common Gull which was wintering around (this photo is from Feb 2nd). 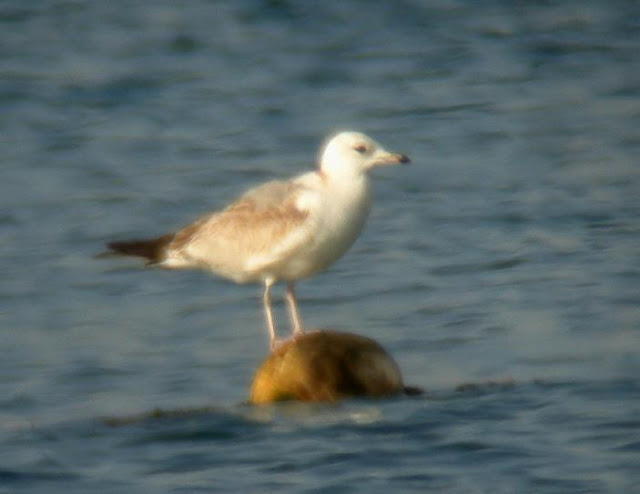 Up in the sky, there are almost daily movements of Steppe Eagles and the first Pallid Harrier was seen yesterday by Liron Ziv.

The Larks seem to decrease in numbers (or are they just pairing for another breeding season?!) but can still be seen around Ovda Valley. And the first Spectacled Bulbuls and Graceful Prinias with brood patches are caught daily at the IBRCE.

Today Yotam caught the first Ruppll's and Savi's Warbler amongst the other Sylvia's, Phylo's and Acro's. 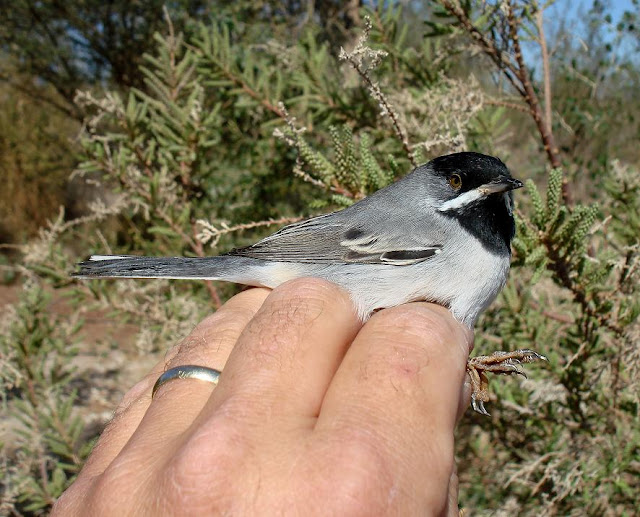 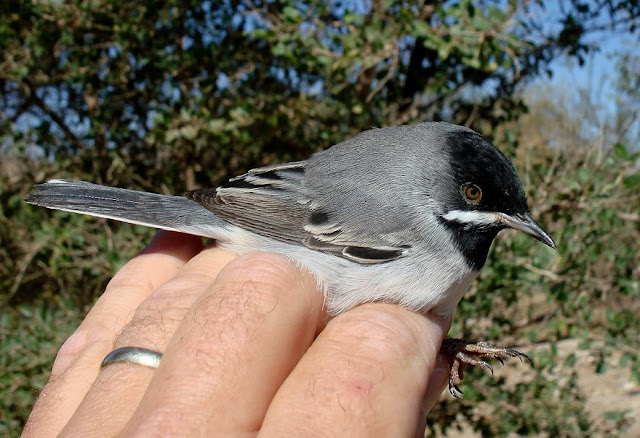 On Sat' the first group of volunteers are joining the IBRCE team and we hope that their hands swiftly will be filled with more interesting species and many birds.
פורסם על ידי Itai Shanni ב- 5:54 PM 0 Comments