November is nearly there...

On Saturday, I went out with Orr Shpigel for few hours in the morning to see if we can find any of the area interesting species and also to try and find more migrants that are still moving through.
We've managed to re-locate the Hoopoe Larks which I've found 2 weeks ago, this time with a group of 6-7 Bar-tailed Larks, and many White Wagtails.
Later we drove to Samar turf fields and had the usual Red-throated Pipits and the usual mix of Desert, Northern, Isabeline, Mourning and Hooded Wheatears. In Elifaz sewage we had big concentrations of Bluethroats a single Savi's Warbler within a wave of Reed Warblers and Chiffchafs, a trio of Squacco Herons and a nice Goshawk flying south. 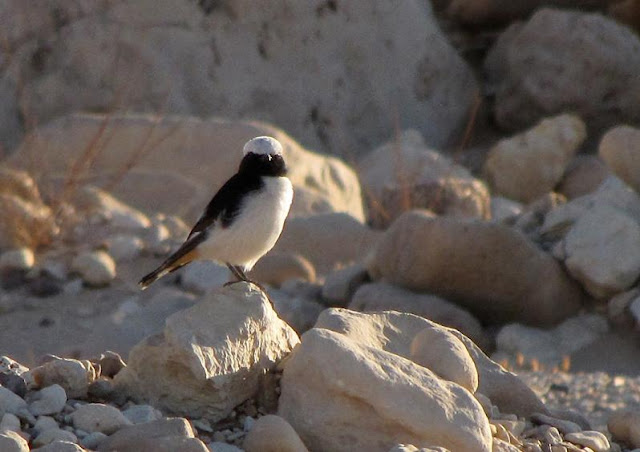 Later, I joined my family for a day of snorkelling in Eilat. On our way back, late afternoon, I had a strange Tern-like bird flying over Eilat Port coming from south. When I stopped the car, I could easily show the kids and Tal (my wife) an adult Black-winged Kite which was flying gracefully over our heads (what a shame I didn't carry any camera with me...)
This morning I was joined by Shai Kabessa (manager of the Hai-bar Yotveta) to check if there are any new arrivals at the Yotveta fields.
There are not too many birds, but a group of 6 Bimaculated Larks among the Red-throated Pipits, White Wagtails and Short-toad Larks were a nice treat.
Later we found another pair of Hoopoe Larks around Yotveta fields that gave us a wonderful show including a great flight dance. 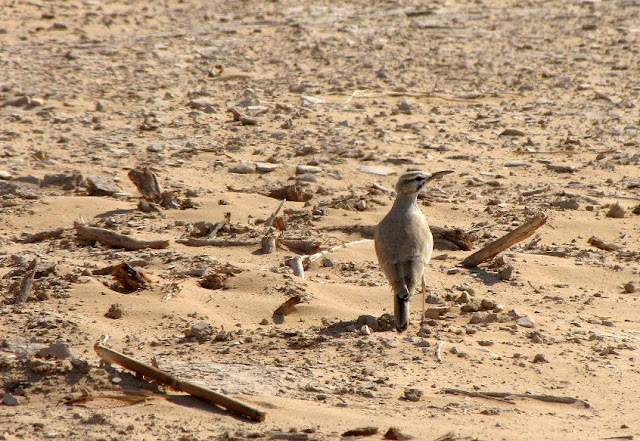 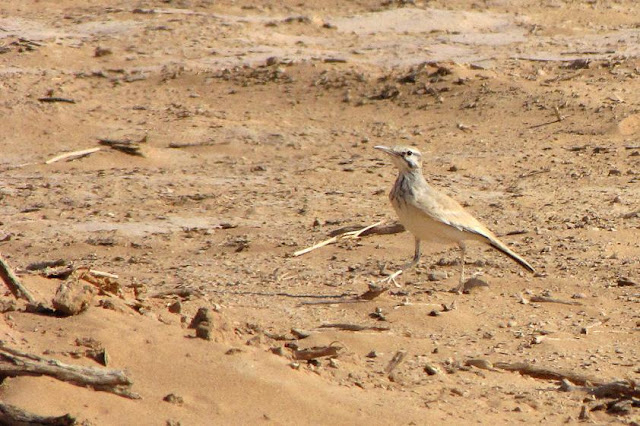 At Yotveta sewage there are hundreds of White Wagtails and Bluethroats and a single White-throated Kingfisher, which is not a common bird down here, as well as Spotted Redshank, Little Stints and Ruffs.
In Samar Sewage, among the common migrant waders a late Little Ringed Plover (most have passed through by mid Oct') and the first Desert Finch for the season.

Autumn is progressing and groups of Eurasian Cranes are seen daily, with a single Demoiselle Crane yesterday flying very fast in the strong northern wind within a group of 10 Eurasian Cranes above K20. Unfortunately, by the time I took out my camera, it was already too far for anything...
Also around K20, numbers of waders is quit steady but there seem to be rising numbers of Pied Avocets, Northern Shovelers and Northern Pintails.
A single Grey Plover has also joined the ponds. Last year we had 4-5 wintering birds, I wonder if this is one of them?! 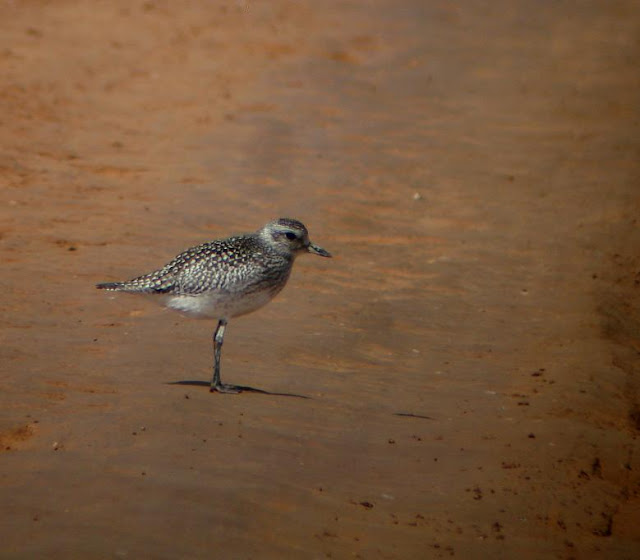 Northern Lapwings are very common up north, but around the southern Arava, we see them less often. Though they are not a big rarity, it is always nice to see them in this habitat... 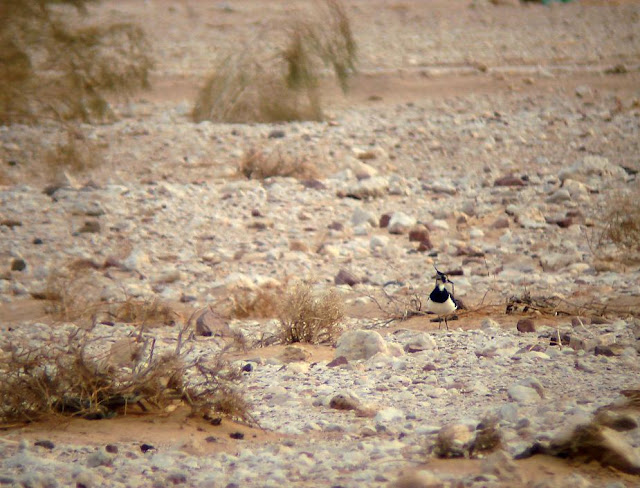 During last weekend i got a report from Mori Chen of a strange Plover at the cowshed of Kibbutz Neve Harif, after seeing his photo, it was clear that this is a nice White-tailed Plover I hope it will stay for the winter... 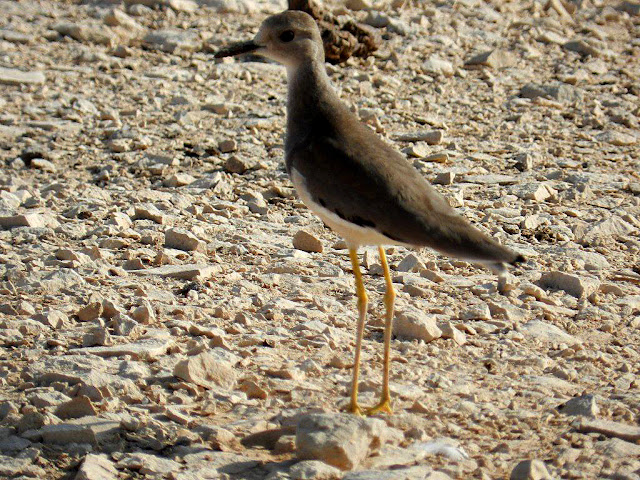 On the Passerine front, there is a steady growth of Desert, Isabeline and Northern Wheatears and few Black-eared and Mourning Wheatears are also around. Chiffchafs are present already and I caught 2 of them at the IBRCE.
Growing numbers of White Wagtails, Red-throated Pipits and the first Water Pipits are seen on most places and as I write these lines, I can see through my window the first Black Redstarts male and female for the season. Bar-tailed Larks are also very visible in many traditional sites and today I had my first Temminck's Lark  for this Autumn, feeding next to K20 ponds. 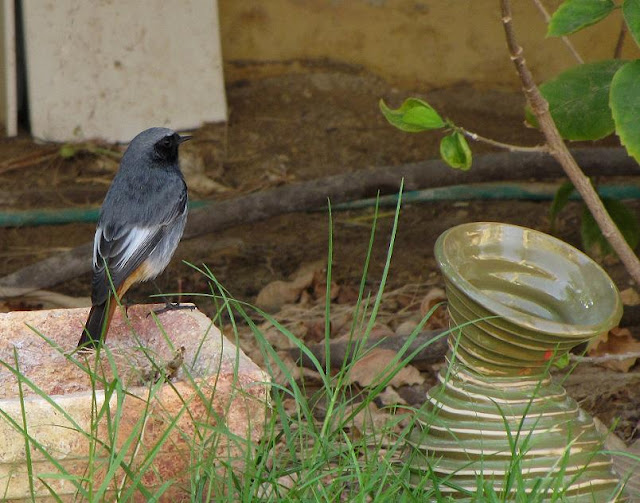 The Pharaoh Eagle Owl  in Yotveta, is very cooperative and there were at least 2 Eurasian Nightjars also flying in Yotveta and another one in Eilat during this week. 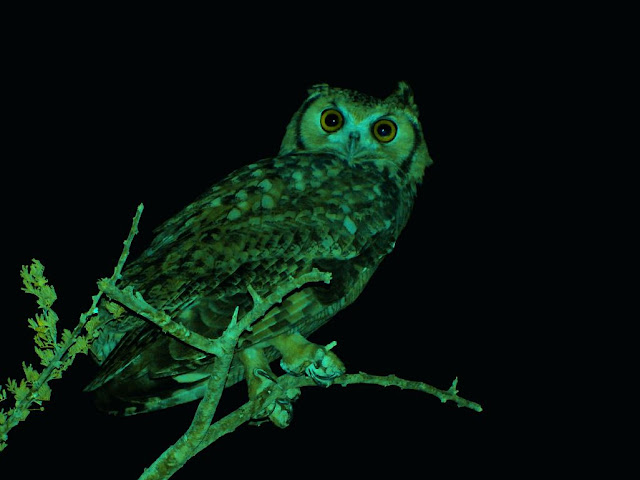 Yoatm reported yesterday of a Golden Eagle flying in the Mts. this has become a very rare sight around Eilat and southern Arava in recent years, i wonder where did it come from?!
Greater Spotted and Booted Eagles as well as Black Kites, Marsh Harriers, Barbary Falcons are also seen almost daily now.
Stay tuned and I will keep updating as soon as I can,
Itai
פורסם על ידי Itai Shanni ב- 1:38 PM 0 Comments

Autumn is great in the desert

Yesterday we (my wife and kids) joined the important event which was carried out at the Samar dunes to try and prevent the operation of a new sand quarry. These dunes are the last remaining dunes on the Israeli side of the Arava which are open for the public and hold a very interesting and important wildlife.
The event went on well and it was great to see so many people from the area and also from throughout Israel who came to support the dunes. 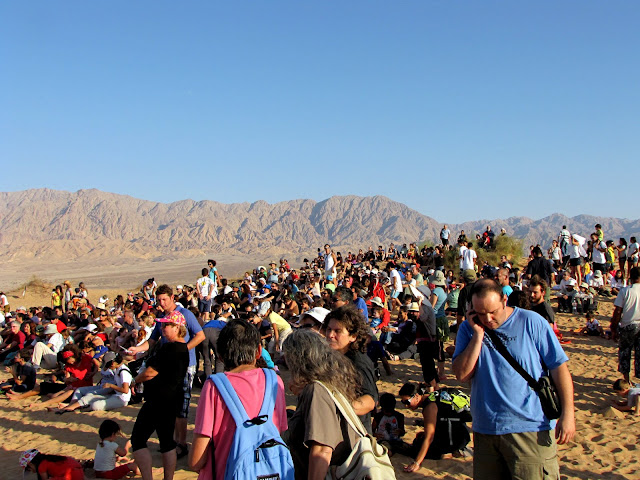 Today i decided to check the area of K33 and also the turf field of Samar.
On my way i received a txt message from a visiting British birding group that a Black-winged Kite was spotted and seen very well around the K19 cowshed. This species is certainly spreading in Israel. A growing number of records for the species are coming from all corners of the country. We also had 1-2 birds last autumn around Eilat and the Arava (the photo is from last year). 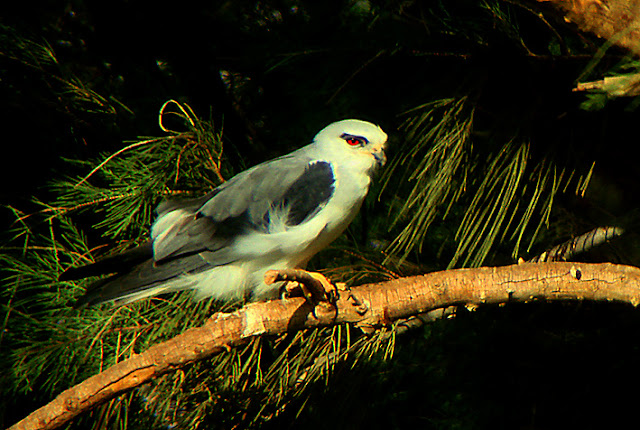 I than proceeded along the old Arava Rd. when suddenly a pair of Hoopoe Lark were jumping next to me, not far from where I've seen them with Re'a last December. 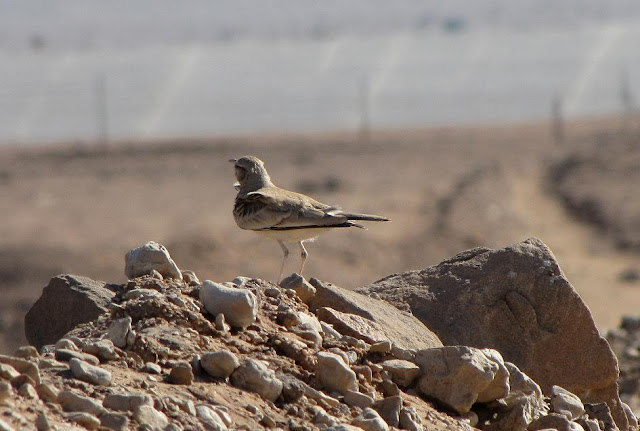 I then drove to Samar where I met Shachar Alterman and plenty of Red-throated Pipits, White Wagtails, a single Caspian Stonechat and one of each Desert, Hooded and Isabeline Wheatears. On my way back I met again the British gang next to Elifaz sewage where we had a White-winged Tern, Bluethroat and 3 Squacco Herons. I learned that they've missed the Larks but had a lone Osprey flying around the area where I had the Larks.
Back on the road towards Eilat, a family of 5 Lichtenstein's Sandgrouse were posing under the shade of a lone Acacia tree. When I txt this to the British gang, they were already too far, but responded that after I left them, they had a Red-breasted Flycatcher at the date plantation next to the Elifaz sewage. 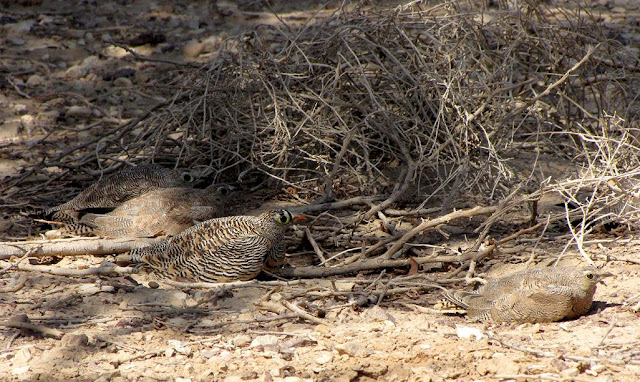 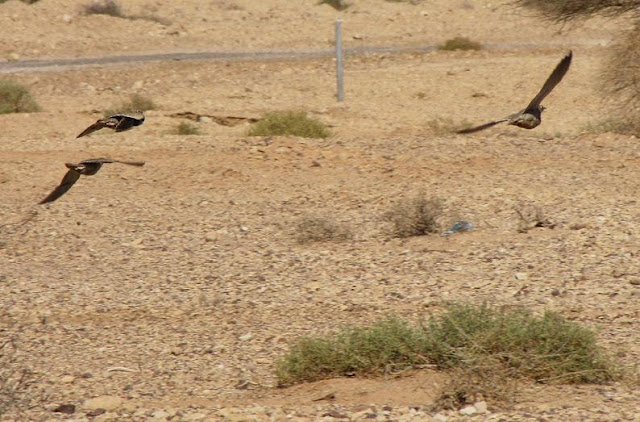 As November (the rarity month) is just around the corner, I hope to have more sightings to report soon...
פורסם על ידי Itai Shanni ב- 2:40 PM 0 Comments 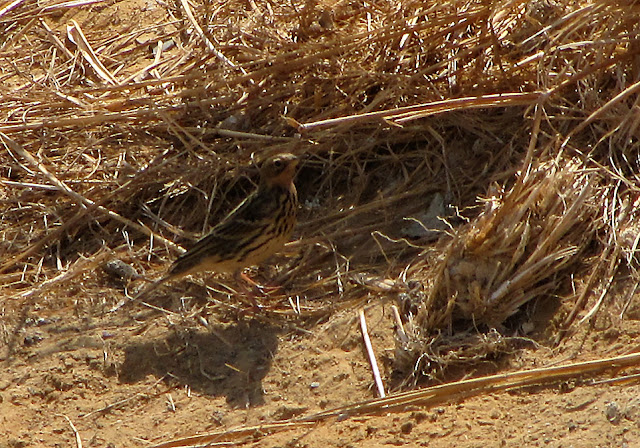 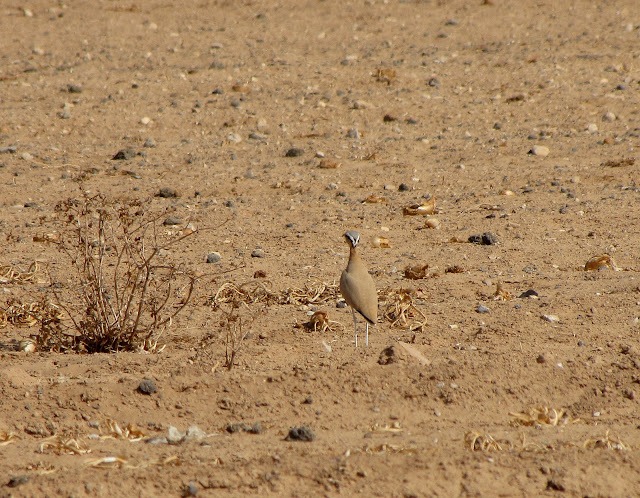 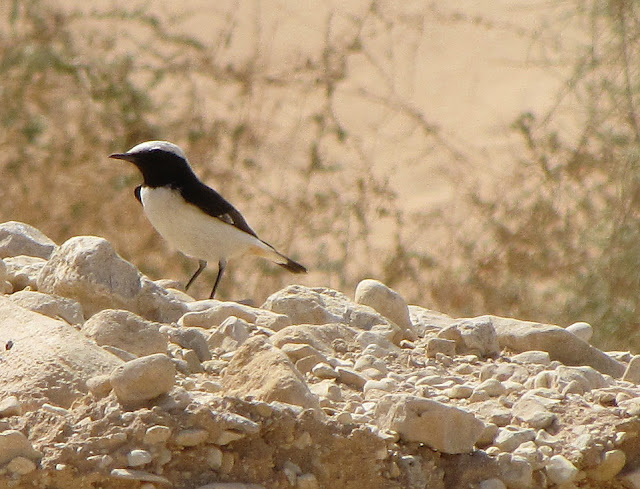 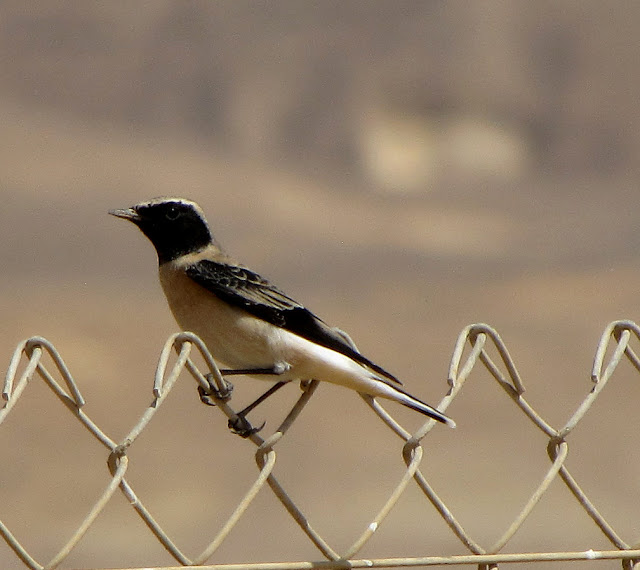 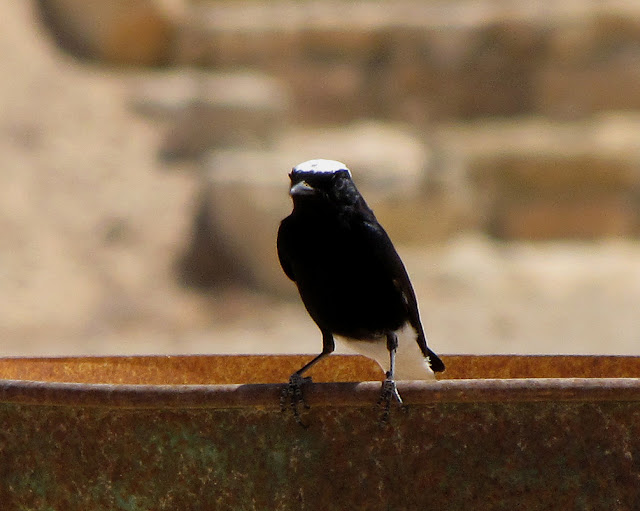 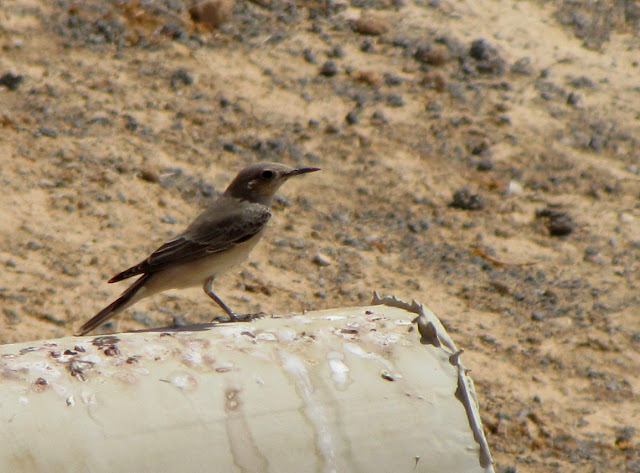 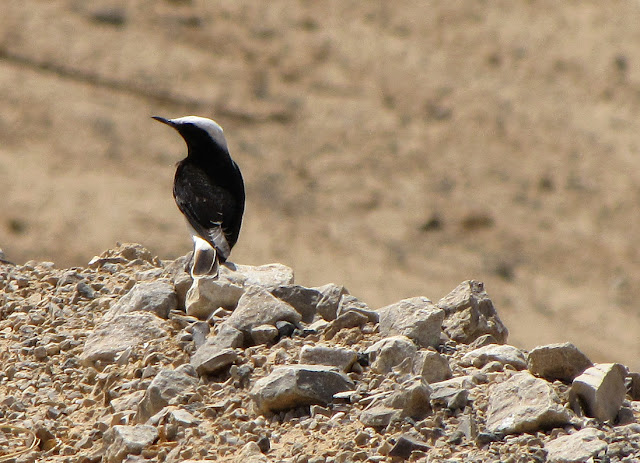 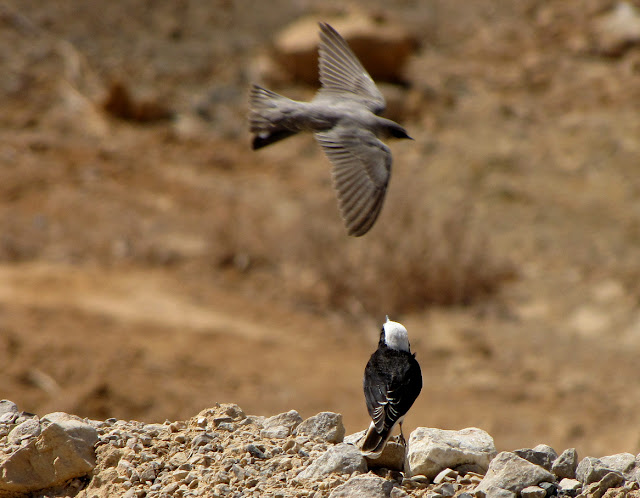 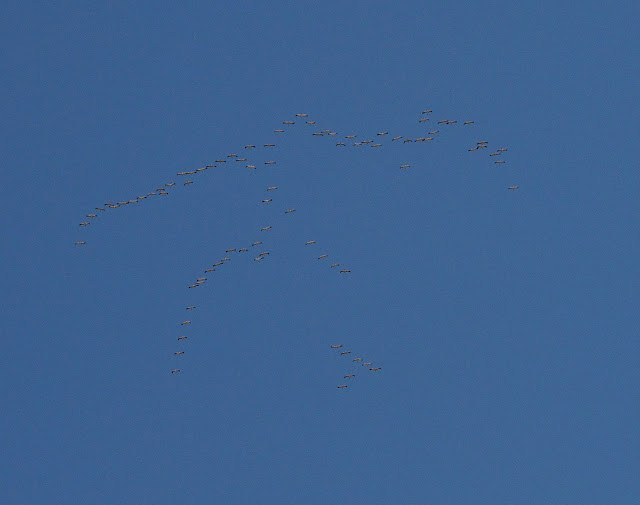 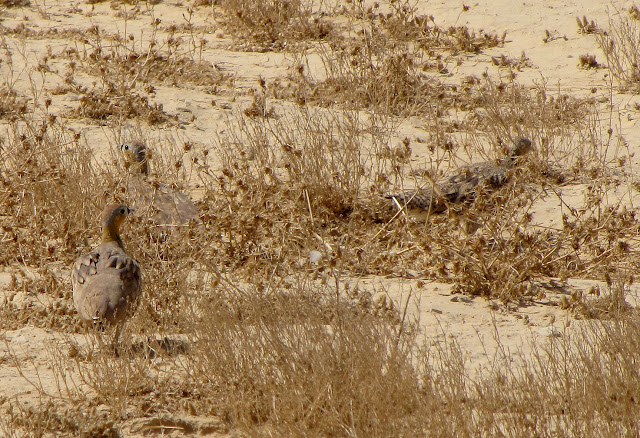 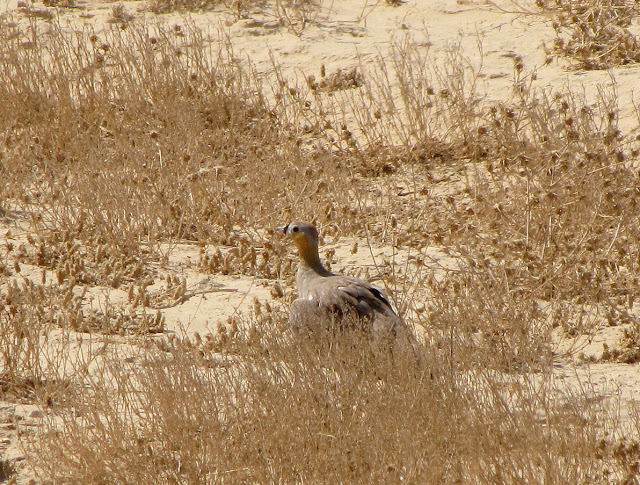 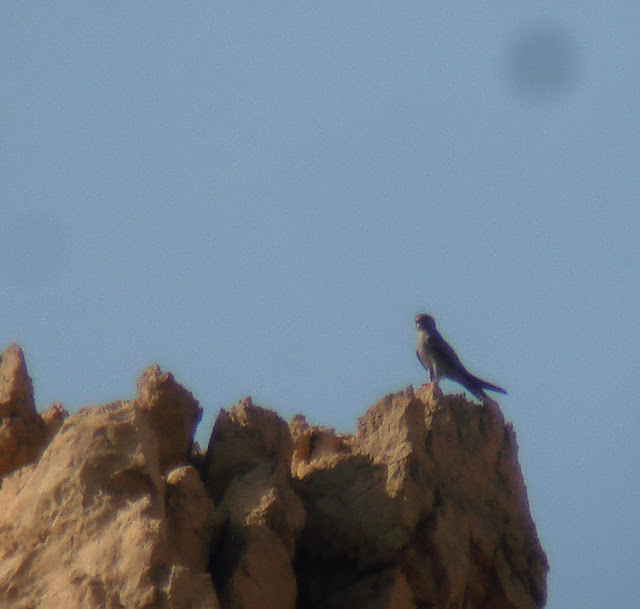