More like 6 to 10 in most of the days…well summer is definitely full on, with temperatures settled around 40c degrees daily, with minimal humidity! Man I missed these conditions while spending last week up north visiting family and friends. I was sweating a lot and did very little birding(most of the time climbing or hanging out somewhere with non birders humanoids…). I did spend 2 morning out, in my old beloved home patch, which I did not visit for over a year- An old Quarry that inhabits tens of breeding Bee Eaters , along with Rollers, Little Owls and more. I was surprised to see some "nature photographers" parking their cars meters from the nesting walls just in front of the nests. I tried to talk them away from the walls, and explaining the gravity of their actions. The ones that didn't apply and left the place were reported to the local INPA ranger. I hope they will be treated properly. These birds are too precious to be destroyed by un-aware nature lovers.
Most of the late migrants are gone, with just a handful still around- Blackcaps, Garden, Reed and Barred Warblers in small numbers. Some Bee Eaters and Sand Martins flying and hunting over the park. Common Terns in small flocks are seen in day time overland migration, and tens of Pallid Swifts now already on their way south to their central African wintering grounds (or should I say skies? )
But as I wrote earlier the summer around Eilat provides some excellent breeders!
Yesterday I had a couple of Little Green Bee eaters, both wearing rings from last year. Not so surprisingly, they were caught together also the first time. 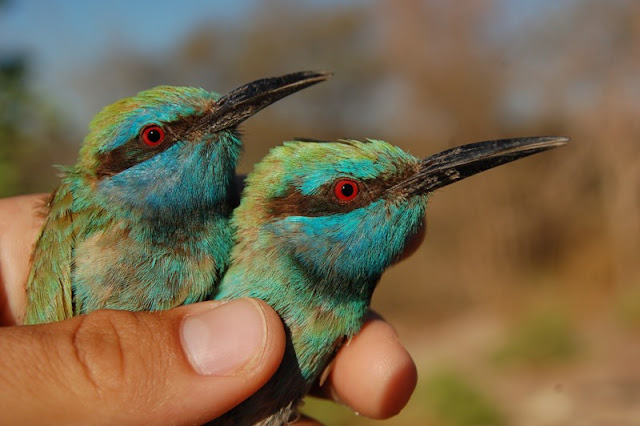 I assume that they are the proud parents of the fledgling Yael and Guy caught during the weekend.
Another beauty that was almost absent from the area since last summer – a Namaqua Dove. 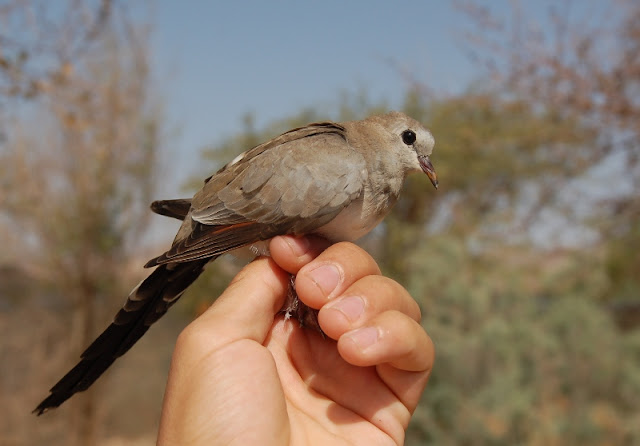 These amazing gemstones used to breed in tens around Eilat during the last decade. A dramatic decline in numbers is noted around the southern Arava since last year, meanwhile it seems like this species is doing quite well all over Israel, with breeding records from western Israel, as well as expansion of range northwards.
The females are not any less elegant or uniquely patterned that the males- 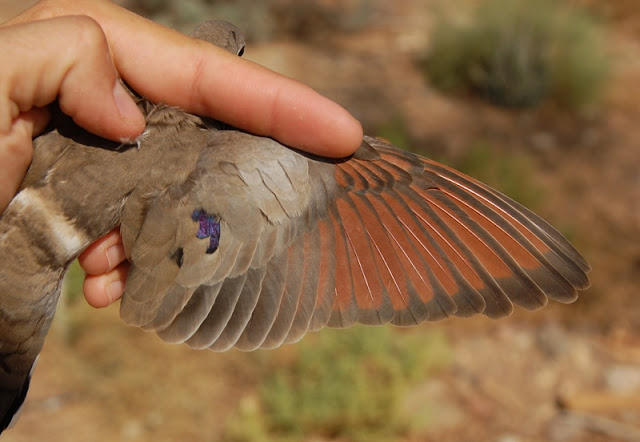 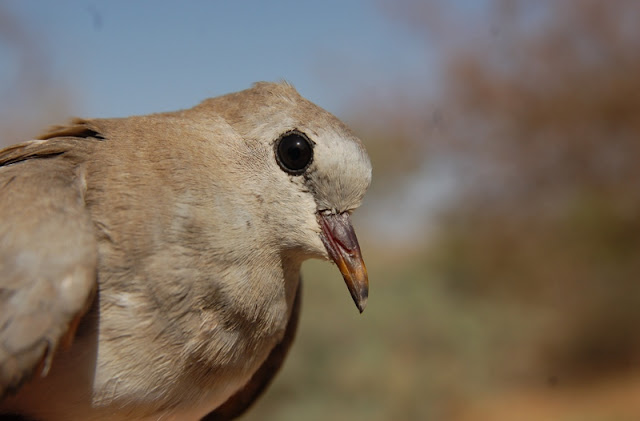 Obviously not all the birds here are so photogenic- actually the commonest birds in the ringing station now are juv. Spectacled Bulbul. They are noisy, biting, scratching shiting a lot and all the time. How can I say…not the best bird to ring. This is Guy holding two brothers. 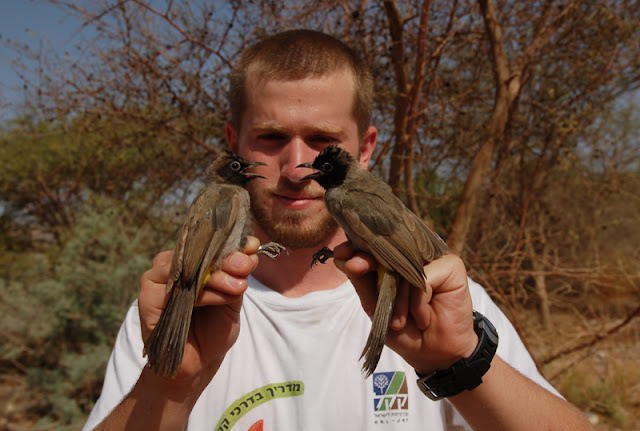 Amazingly, I found myself in full activity, out in the field with my bins on yesterday at around 12:00! After discussing the potential appearance of Desert Darter Sympetrum sinaiticum (not a bird but a Dragonfly) in Eilat Itai and I decided to check the canal near the IBRCE.
A new species for Israel we didn't see…but we did have some good discoveries!
A male Black Percher Diplacodes lefebvrii  was the first for us around Eilat. There are old (Earlier than 80's) evidence about this species around the southern arava and Eilat, but no records since(possibly due to lack of observations). Anyway this was a lifer for me!
Just a few minutes after the Percher we had the first record of a living individual of Slender Skimmer Orthetrum Sabina  for Eilat region!  The first record was of a dead individual found in one of our "Helgoland" traps last November. Being a somewhat neglected field among Israeli wildlife enthusiasts, Dragonflies watching is very exciting for me! Almost nothing is known about these amazing animals in Eilat, and watching them gives me something to do in these "dead hours"(apart of sitting on the beach for hours J)…
Other species seen around these days-
Lesser Empror Anax parthenope- 2-3 males.
Broad Scarlet Crocothemis erythraea- quite a few males seen, with one couple at the canal yesterday.
This is a male caught last Saturday- 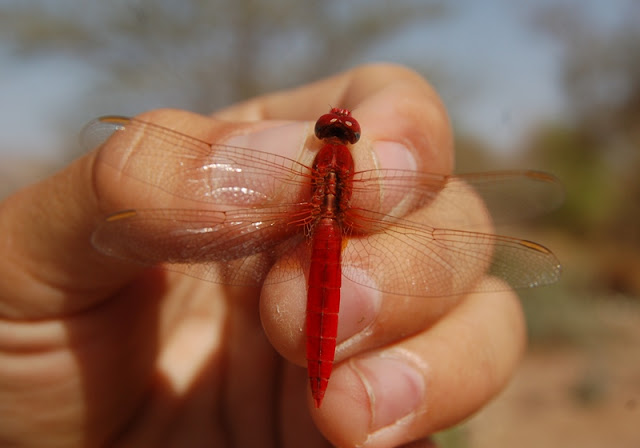