Winter Birding, mud, rain and nice surprise down the road

The days are running fast, not only because they are getting shorter, but because birds numbers are in their best average as well. Bluethroats and Chiffchaffs have once and for all flooded the place and our first mint-nets round are providing us with up to forty birds every day. Starting by Wednesday the 17th, we had 22 Bluethroats, which mean more than the half of the morning´s captures in addition to the probably last Thrush Nightingale of the season; Tree Pipits, Redstarts, Sedge Warbler (may be the last, as well…), Kingfisher and the usual staff. And these were the ringed species but, over and through the station but always having fun around our nets and traps, other migrant species were detected like the Spotted Crake that was the whole morning feeding beside the ponds nets (a Little Crake is also present at Yotveta sewage) or the2 Little Gulls that flew barely centimeters up the same nets. Little bit farther, in the salty ponds one, at least, Broad-billed Sandpiper were together the usual flock of waders.

Thursday 18th was slightly better, with 23 Bluethroats that involved some subspecies like volgae, svecica and cyanecula, identifiable only in adult males.
Willow Warblers still contended against Chiffchaffs in number and around the Ringing Station some Cormorants just arrived. In K19, at the end of the afternoon, Manolo, Yael and I enjoyed the fun that two Bonelli´s Eagles, a young bird and an immature, flashing once and again the regular flocks of White Storks, Grey Herons and Great Egrets plus a single Black Stork, seven Flamingos and more than a hundred ducks, Mallards, Pintails, Shovelers, Teals and Wigeons. Also the Purple Swamphen was feeding between the reeds and the Lichtenstein´s Sandgrouses exhibited its punctuality arriving at the half past five tea hour. The day, short as I said, was gone.

Friday 19th was better again than the day before with 28 Bluethroats, little more Chiffchaffs than Willow Warblers and other candies like a young male Namaqua Dove or the first Stonechat ringed this Autumn (Caspian Stonechats are also present in Yotveta and throughout). 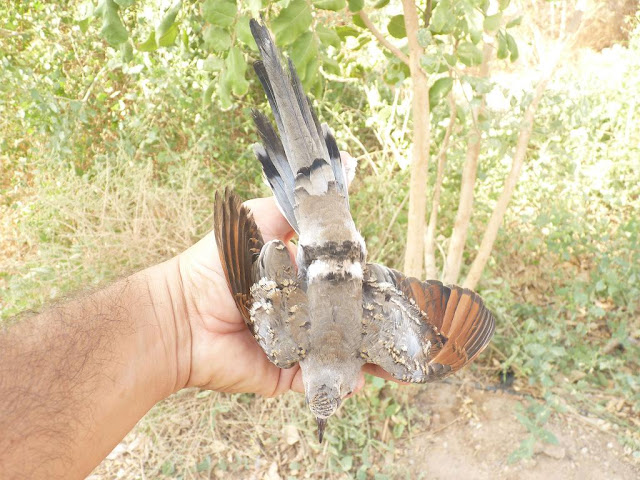 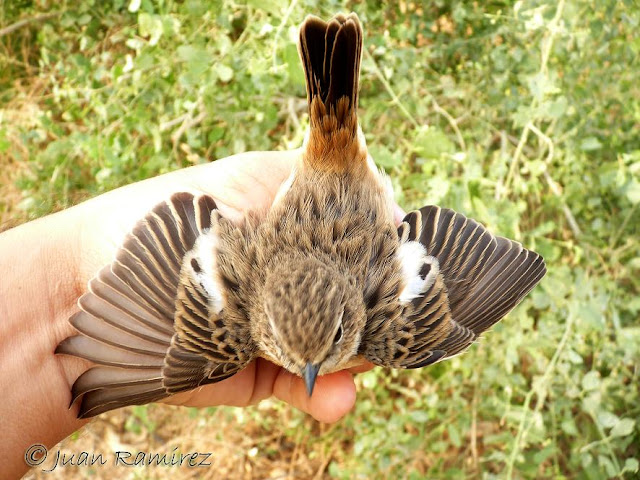 Almost out of time after lunch (Yael´s vegetarian one, omnivorous mine and Manolo´s neverending) we checked North Beach where, of course, the Brown Bobby rested unconcerned about the sea border between Israel and Jordan. Also some White-checked Terns were sitting on the buoys, mixed with Sandwich and Caspian Terns and White-eyed Gulls. It seemed that we were just after opening nets when the sun felt down and another day was gone.

A day like Saturday 20th must be obligatory in any ringing station that works the Autumn. One hundred and thirty one captures in the morning, 61 of them Bluethroats; 30 Chiffchaffs vs. only one Willow Warbler, one Northern Wheatear and two females Dead Sea Sparrows were the highlights of the seventeen species, still with a lot of Reed Warblers, one Savi´s Warbler, Blackcaps, Lesser Whitethroat, Garden and Sardinian Warbler, Wryneck, Redstarts and the very first day that we happily don´t catch any Shrike despite their presence. Perhaps the best day of the season (somebody remember the Paddyfield Warbler´s day, September 10th?), only misted up because Manolo´s go back to Spain with his superb Swarowsky telescop… we´ll miss you Manolo. Both of you…
J. 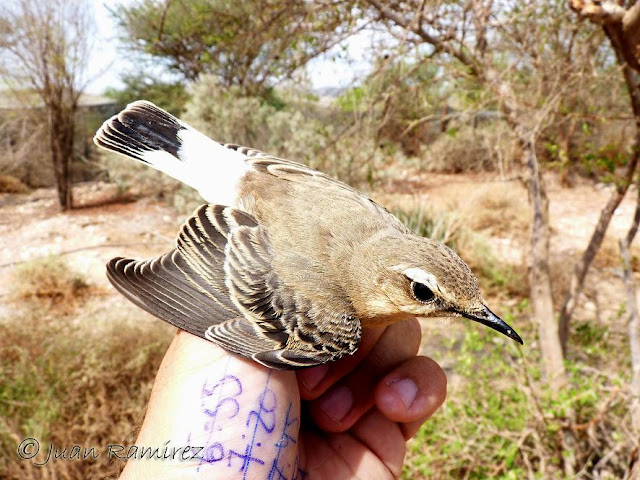 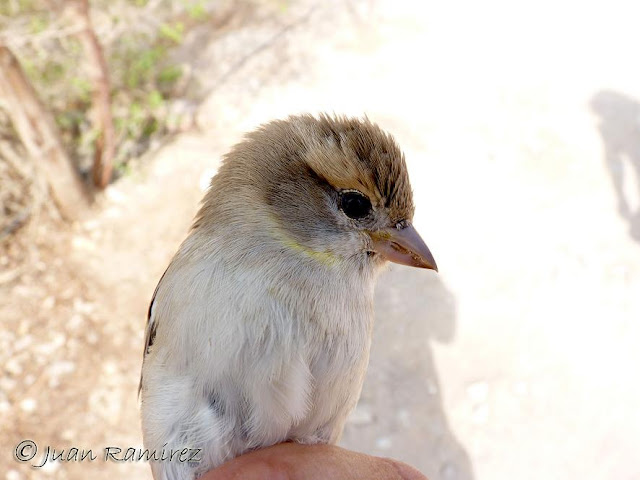 On the 21st in the afternoon the sky were opened and at last we had some rain, flush floods and much mud throughout. Not too many birds were present due to this rain early in the morning of the 22nd at the IBRCE, but a beautiful Pharaoh Eagle Owl was seen and photographed on full daylight coming to drink from the fresh puddles in Beer-Ora (where I live). 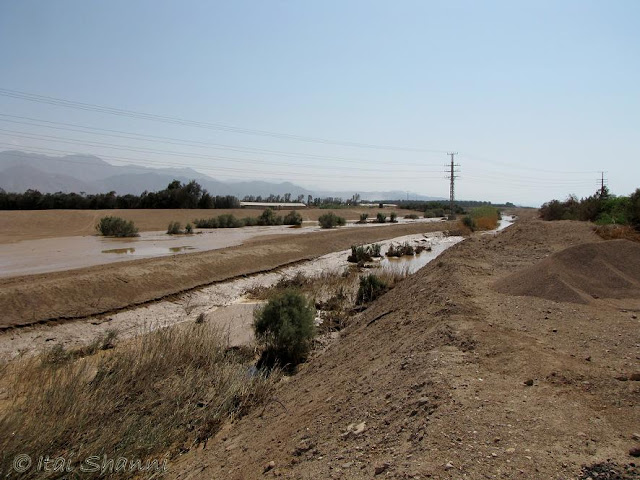 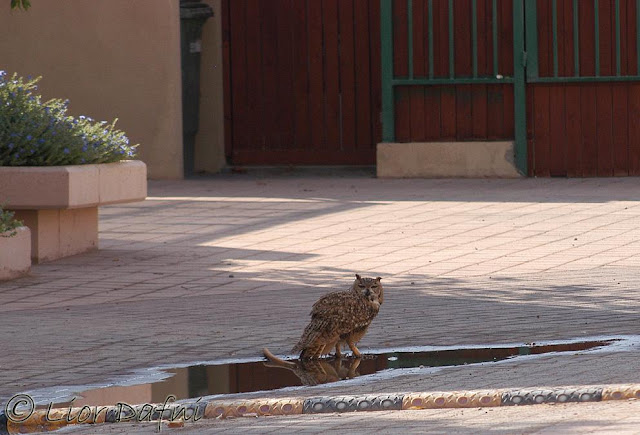 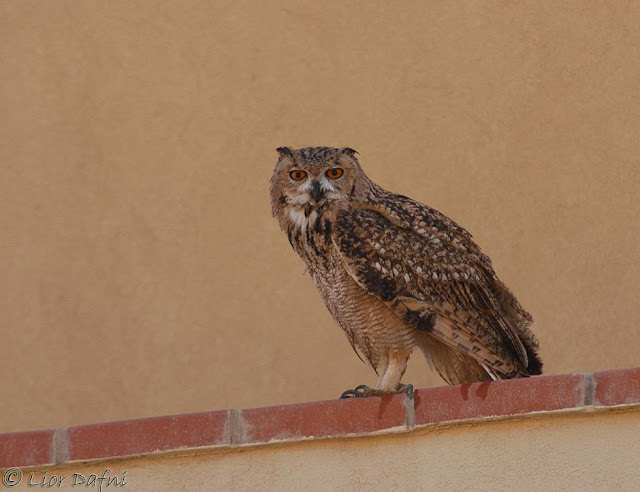 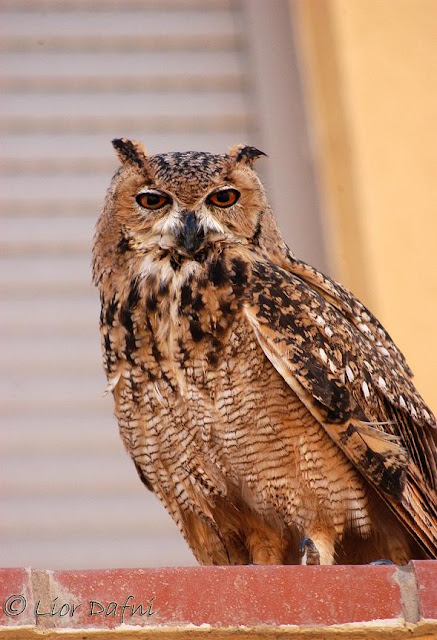