Friday 12th was the first-day-after the last Swallows wave so the number of captures turned back from the hundreds to the forties and Reed and Sedge Warblers and Blackcaps led the morning while the number of Willow Warblers decreased. Quite the opposite with Bluethroats, who are coming for staying the whole winter.
Savi´s Warblers and Lesser Whitethroats still remain but Eastern Orpheans and Olivaceus Warblers or Common Whitethroats have left the house till next spring migration...
And the Chiffchaffs? Everybody who comes to the IBRCE Ringing Station ask if the Chiffchaffs have come already? as if the migration timing of every single species were our duty... Sadly it´s not, in spite of one´s shortcomings or the unlimited Manolo´s cooking skills, not a single one Chiffchaff yet despite the reports of some friends, like Steven, who swears to have seen some last week in Northern Israel… OK, we´re patient guys so be patient you as well!
Saturday the 13th started promising; A young Cuckoo demanded our attention just at first light. Such a nice bird could be a nice ringing at any Spanish ringing station but here, a dark shadow covered our initial gladness… All Israeli birdwatchers know why, there is another bird, named Oriental Cuckoo that resembles the same. Not just in a cloudy day watching, even in the hand, and even also if you hear it… After a quick reading of the available bibliography and making the whole station untidy, we couldn't find a single feature for suspecting about the mighty Manchurian origin of this single Cuckoo. So we released the bird after the ringing with our best wishes for all the splitters and geneticists who always care for avoiding our boredom… Please, leave the birds and look for a cure for baldness, Manolo will appreciate that!!!
The morning didn't provide us more unusual birds to ring, on the other hand, raptor migration cursed the sky over us again. Big birds this time like some tens of Steppe Eagles, including a brand new plumaged first year individual and also a young Griffon Vulture, scarce visitor in Eilat, that shared the thermal with the eagles in the same flock. 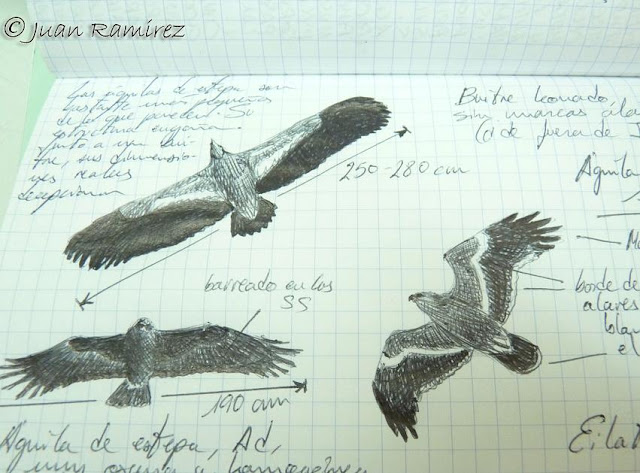 Also small raptors as the Hobby or Lesser Kestrels were flying to South all noon along.
We decided that this fluxes may be even stronger in the Eilat Mountains so, after the sine qua nom lunch, Steven, Manolo and I drove till Wadi Eteq where, despite the low number of raptor migration, we were gladly surprised for the variety or Wheatears and migratory passerines we found there. Enough to say we could enjoy five Oenanthe species Black-eared, Desert, White-crowned, Hooded and Eastern Mourning Wheatear plus the Blackstarts: all together, just in the same place, local desert species and migrant ones...
And not forget the Desert Larks, Eastern Stonchat, Sand Partridges, Redstarts, Spotted Flycatchers, Sooty Falcons or Steppe Eagle. Not bad at all for a day that was already done.

And a short report from myself (Itai) after checking few spots in the desert during Sat’ together with Shachar Shalev:
We started at 06:30 at Uvda Valley where first groups of wintering Larks were present; these included some 50-70 Bar-tailed Larks and 30-40 of each Thick-billed & Temminck’s Larks as well as good numbers of Trumpeter Finches, few Desert Larks and a nice collection of Wheatears (5 species) including this nice male Desert Wheatear. 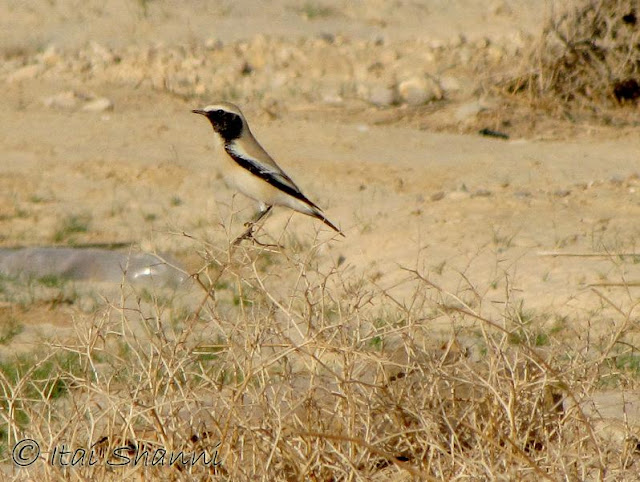 At one point a mixed group of species were mobbing a beautiful Saw-scald Viper Echis clolratus. 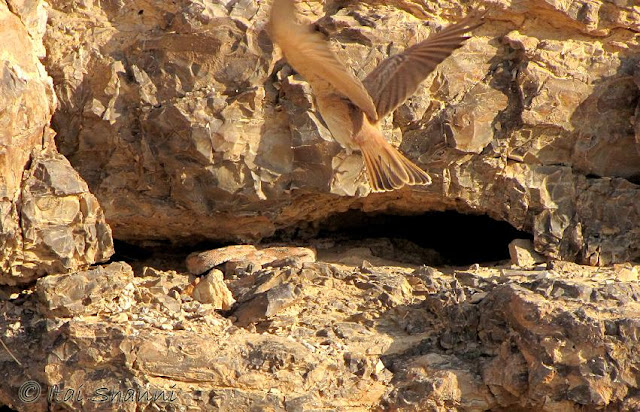 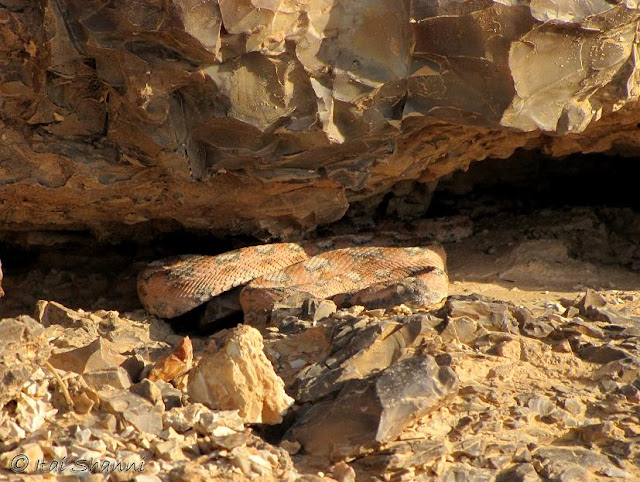 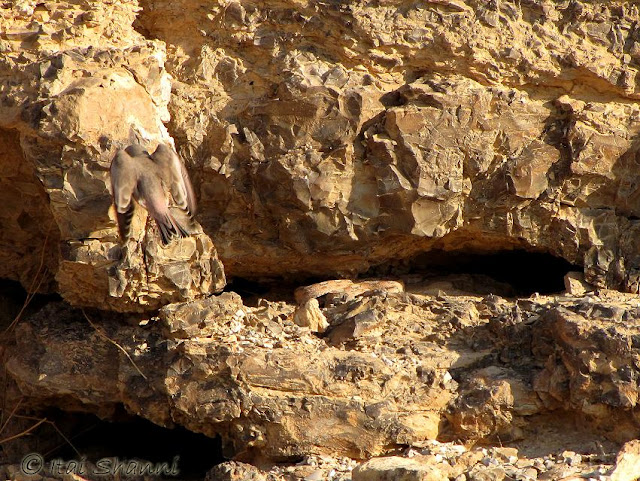 And an Asian Wild Ass Equus hemionus was another great treat for this morning. 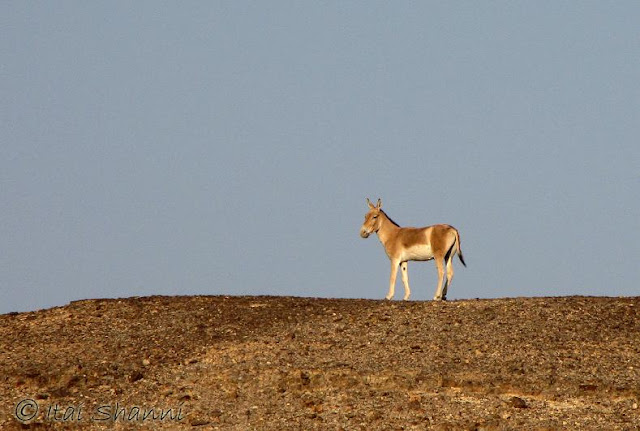 The recent floods have created a lot of water puddles along the wadies so not even a single Sandgrouse was heard throughout the morning. We drove towards Neot Smadar sewage, but could not find any worth noting species so we decided to continue down to Yotveta. A juv’ Hobby (a product of this year breeding season) was hunting in the northern fields (sorry for the quality...), 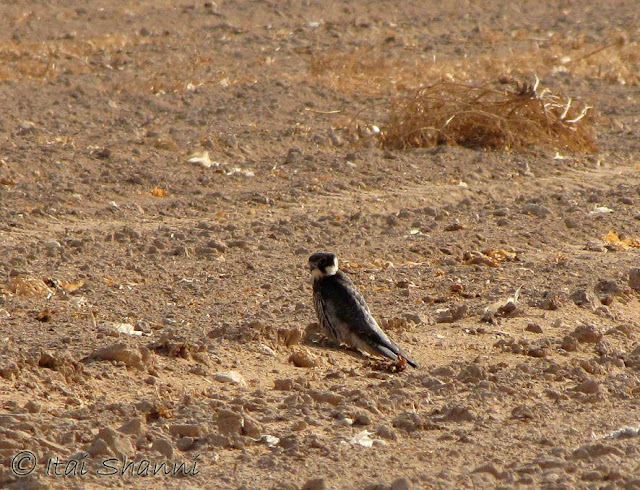 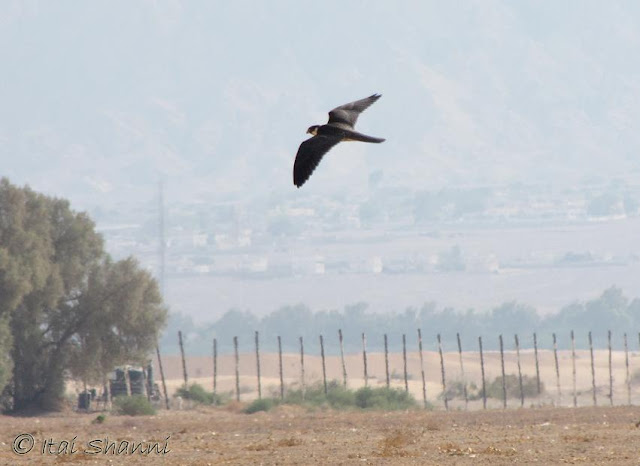 while the southern circular field was not too busy with only a few tens of Red-throated and Tawny Pipits and a very big wave of White Wagtails at the sewage pond with the few Common Snipes and the first Northern Pintail as well. 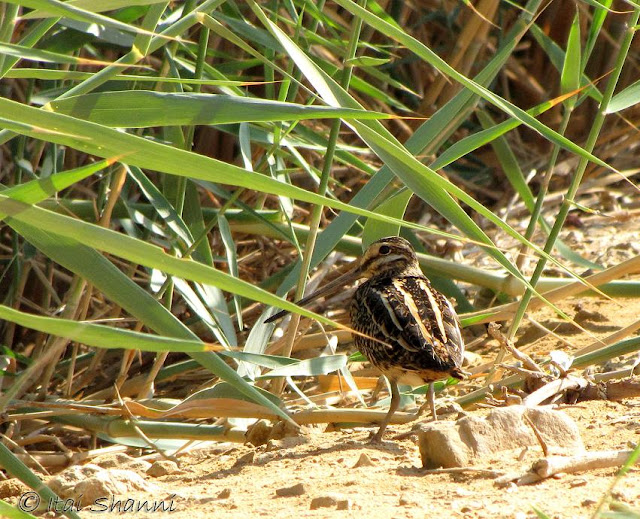 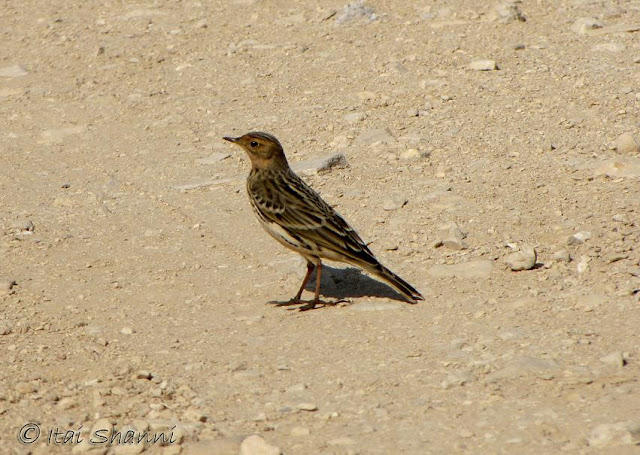